There for Tomorrow: Forward Thinking 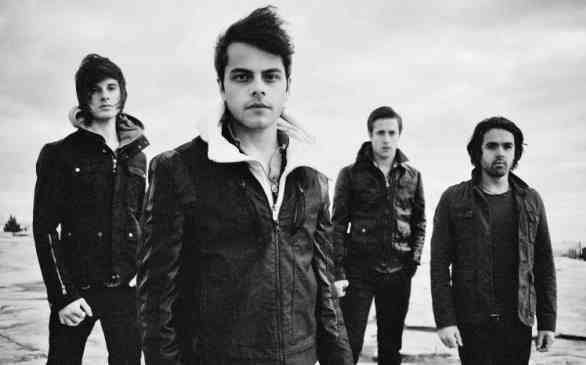 You can judge a man by the company he keeps. The age-old adage used as a reminder to not associate with those who themselves associate with people of ill repute is one of precious few clichés our parents tell us as children that actually ends up being true. However grudgingly we may admit it. Though, to be fair, your parents probably haven’t ever heard of There for Tomorrow, let alone know anything about them as people. And if ever there was a group of guys who disprove that theory, it’s them.

As living proof that creativity and artistry can still thrive in a sea of illegitimacy, guitarist Christian Climer, bassist Jay Enriquez, drummer Chris Kamrada and vocalist Maika Maila have fought an uphill battle since their start together. Though they’ve made a name for themselves in the modern pop-punk scene with multiple runs on Warped Tour and supporting the likes of Mayday Parade, Every Avenue and Anberlin on tour, the Orlando-bred foursome might be the genre’s game-changer.

Pulling influences from classic rock to post-rock all the way to dub-step for their latest album The Verge, the band has been single-handedly redefining what it means to be a young band in the punk scene, despite many of their contemporaries towing the opposite end of the line.

“Every band has their own thing, especially in this genre of people our age, and we respect it all. We used to be a little more spiteful toward things that we thought weren’t genuine, but we’re starting to realize that we’re not the judge of what’s real or not real anymore,” says Maile. “These kids, these people are the judge, not the labels, not the artists.”

For all their good work in the name of restoring faith in young, up-and-coming rock bands, the band knows that patience is key when attempting to change the status quo of an entire genre.

“It takes a bit of time to break through the clutter and for it to resonate before it means something real. There’s no rush, we’re just getting better,” says Maile.

“We're finding out how to be honest and how to escalate that honesty beyond just four dudes in a band, make it an experience,” he says. “All of our favorite musicians and all of my idols are unrealistically good. That’s what I aspire to be as a songwriter, vocalist and guitarist, but we’re just scratching the surface now.”

Perhaps that more than anything is what sets the band apart, a complete lack of complacency and a constant desire to better themselves and push their own boundaries. Where once the band had few differentiating characteristics from every other teenage band writing riff-heavy tracks about growing pains and relationship angst, seasoned professionals now stand. Maile having grown into a soulful powerhouse vocalist and both his and Climer’s emotive and atmospheric guitars being more in line with Thrice and Circa Survive, the band has built a sound they stand behind. Even if the masses haven’t noticed it yet.

“It’s turning into less of a job now. If we want to make money, we can do it elsewhere,” says Maile of his reignited drive. “It’s just passion now. All the things we do outside of There for Tomorrow really add up to the things we do in the band. I went through a dry spell after we finished The Verge because I put so much into that month. Seven days a week, 14-hour days, and very willingly doing that.”

The concept of a total commitment and devotion to is one Maile has had since an early age, however.

“My mom and my dad were huge supporters of me playing music. They could tell early on that it helped me be different and stand out from the other kids,” he says. “I’m really thankful I found music before the digitalization of the industry. Listening to the cassette was all I had, I couldn’t go on the computer and get all the b-sides. My first idea of a concert, of a live presentation of music, was a stadium. Legendary artists playing in fields of people. That’s still my idea of what a show is.”

Despite being in a self-professed “baby band,” Maile and his band mates have done a respectable job of bringing the stadium rock to some of the smallest venues the country has to offer. But regardless of how big the rock they bring might be, the one thing that has remained unwaveringly small for the band over the years is their egos. Which is exactly why There for Tomorrow aren’t just better skilled than some of the company they keep, they’ll be around a lot longer than them too.