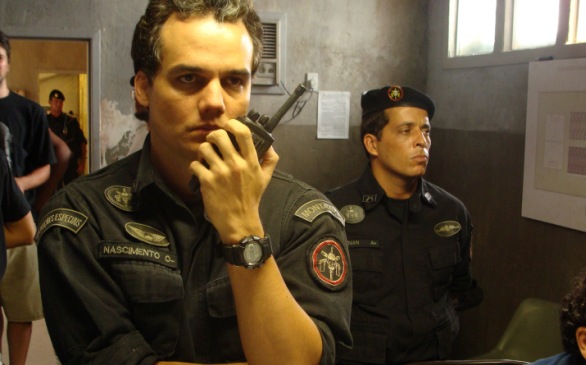 From Oscar contenders to the beginning of the end for Twi-hards, this Holiday season, your stocking is stuffed with movie stars and buzz-worthy box office offerings.

Following a lauded debut at the Telluride Film Festival and much buzzed-about play at the Toronto Film Fest, The Descendants marks director Alexander Payne’s return to filmmaking after a seven-year absence following Sideways. Back, and in fine form, the film stars George Clooney as a wealthy Hawaiian landowner who takes his daughters on a trip from Oahu to Kauai after his adulterous wife lands in a coma. It’s an early awards favorite that’s not nearly as “Days of Our Lives” as it may sound.

Elite Squad: The Enemy Within (Variance)

An outstanding continuation of 2007’s The Elite Squad, a semi-fictional account of the Special Police Operations Battalion of the Rio de Janeiro Military Police and their complicated relationship between law enforcement and politics. The Enemy Within is Brazil’s Academy Award submission for Best Foreign Film and the highest grossing movie ever released in Brazil, (deservedly) surpassing even Avatar in ticket sales.

Mumble (voiced by Elijah Wood), the tap dancing penguin, is back, and this time he has a son, Erik, who, like his father, is struggling to realize his talents in the Emperor Penguin world. Since penguins mate for life, the absence of Brittany Murphy, who voiced Mumble’s love interest Gloria, will have to be explained, but keep an ear out for voice cameos by Brad Pitt and Matt Damon as tiny krill.

Come on, do we even have to tell you? If you’re a Twilight fan, you already have this date in your calendar and a faux wedding invitation on your wall. Bill Condon (Chicago, Dreamgirls) directs Kristen Stewart, Robert Pattinson, Taylor Lautner, et al, as the twinkly vampire saga begins its final chapter with Edward and Bella tying the knot, consummating their passion and making a baby that could kill Mrs. Cullen-Swan. But you already knew that, didn’t you? Part 2 hits theaters in November 2012.

Who wants to see Keira Knightley getting spanked by Michael Fassbender? David Cronenberg, as kinky as ever, delves into the world of Carl Jung (Fassbender), looking at his relationship with Sigmund Freud (Cronenberg regular Viggo Mortensen), his affair with a young patient (Knightley) and the birth of psychoanalysis, which proves it’s often the sickest people who become shrinks.

Martin Scorsese’s first 3D film, based on Brian Selznick’s novel, The Invention of Hugo Cabret, about an orphan boy living a secret life in the walls of a Paris train station, is a long way from the Mean Streets he usually sticks to. Family fun with Scorsese? Are you talkin’ to me?

“It’s time to play the music / It’s time to light the lights / It’s time to meet the muppets” … as Jason Segel reinvents them. In the Muppet’s first theatrical release in 12 years, the film follows some of the world’s biggest Muppets fans, including Segel and Amy Adams, as they fight to save the Muppet Theater from a greedy businessman (Chris Cooper) who plans to demolish it to drill for oil. Cameos, from Lady Gaga to Danny Trejo, abound.

The Artist (The Weinstein Company)

Silent, French and black and white – not exactly what has folks lining up for the typical Friday movie night. But buzz out of Toronto and Jean Dujardin’s Best Actor win at the Cannes Film Festival, make this story of roaring ’20s Hollywood – as silent movies are replaced by the talkies, and the connection between a declining male film star and rising actress – a must-see.

More kinky sex with Michael Fassbender; fun for everyone! This time Fassbender stars as a 30-something Manhattan yuppie (think [American Psycho's] Patrick Bateman without the homicidal tendencies), who is unable to keep his sexual urges in check (and, really, who would want that from Fassbender?). After his younger sister (Carey Mulligan) moves into his apartment, his world spirals out of control. Directed by Steve McQueen who worked with Fassbender on the exceptional 2008 film, Hunger.

Another sexually charged offering, one that divided critics following its Cannes debut. Sleeping Beauty stars Emily Browning (Sucker Punch) as a college student who takes a job as the leading lady in a bizarre sex game. Offering explanation for the title, the idea is she takes a drug that puts her to sleep while paying customers do whatever they want with her limp body with the only rule being no penetration, which isn’t a problem for most customers who prefer to abuse her body. Delightful.

I Melt with You (Magnolia)

Thomas Jane, Rob Lowe, Jeremy Piven and Christian McKay (who was outstanding in 2009’s Me and Orson Welles) star as a reunited posse of disillusioned 40-something college friends. After tragedy strikes at a party one night, they decide to resurrect a teenaged pact that makes their world spiral out of control.

Remember Garry Marshall’s holiday-themed, celeb-engorged vignette fest, Valentine’s Day? This is kind of the sequel. Following the lives of various couples and singles in New York City as they intertwine over the course of New Year’s Eve, the film is headlined by everyone from Ashton Kutcher to Zac Efron.

Who better to look after your kids than … Jonah Hill? The Superbad star headlines this comedy from David Gordon Green (Pineapple Express, Your Highness) about a lazy, irresponsible, live-at-home college student who starts babysitting. When his girlfriend (the always hilarious Ari Graynor) invites him to a party, he finds himself strapped with three kids being chased by two psychopathic drug dealers through Manhattan. Think of it as Adventures in Babysitting meets “Eastbound and Down.”

Starring Colin Firth, Gary Oldman and Tom Hardy, this Cold War-set tale of espionage, based on the book of the same name, is getting serious Oscar buzz. Avoid trailers, avoid reviews; just SEE IT!

Madonna directed this romantic drama that moves between the affair King Edward VIII had with Wallis Simpson, which led him to abdicate the throne, and a contemporary romance between a married woman, named Wally (Abbie Cornish), who is obsessed with Simpson’s story.

We Need to Talk About Kevin (Oscilloscope)

Based on Lionel Shriver’s chilling novel, Tilda Swinton stars as the mother of a boy named Kevin (Ezra Miller), who is recounting and reliving the events that lead up to her son’s massacre of students and teachers at his high school. (Wide release is Jan. 27.)

Considering Young Adult was directed by Jason Reitman (Up in the Air, Thank You for Smoking) and penned by Diablo Cody (Jennifer’s Body), whose first collaboration was Juno, it’s got major hipster film cred. But can you capture lightning in a bottle twice? Honest to blog, it’s a toss-up. Charlize Theron stars as a writer of teen literature who returns to her small hometown to relive her glory days and attempt to reclaim her happily married high school sweetheart (Patrick Wilson). Once there, she finds herself forging an unusual bond with a former classmate (Patton Oswalt) who hasn’t quite gotten over high school either.

In this sequel to the bafflingly successful Chipmunks franchise, the Chipmunks and Chipettes go on a cruise with Dave Seville (Jason Lee) and, as always, run amok. But when their wild ways go overboard (It’s an entendre and a pun!), they end up marooned on a tropical island.

Roman Polanski directs Jodie Foster, Kate Winslet, Christoph Waltz and John C. Reilly in Yasmina Reza’s play about two sets of parents forced into a cordial meeting after their sons are involved in a schoolyard incident.

Someone light a fuse and cue the sing-a-long: “Dun dun duntdunt, dun dun duntdunt…” Tom Cruise returns to the role of IMF agent Ethan Hunt in the fourth Mission: Impossible film, this time produced by J.J. Abrams (who directed the third movie) and helmed by animation impresario Brad Bird (Ratatouille, The Incredibles, The Iron Giant). (Wide release is Dec. 21)

The Adventures of Tintin (Paramount)

The Girl with the Dragon Tattoo (Columbia)

You know her, you love her - it’s Lisbeth Salander, ladies and gentlemen. Could this finally be David Fincher’s year to win an Academy Award thanks to his English adaptation of Stieg Larsson’s juggernaut Swedish novel series starring Rooney Mara and Daniel Craig? If the trailer featuring Trent Reznor and Karen O’s version of “Immigrant Song” is any indication, he’s definitely a frontrunner.

In the Land of Blood and Honey (FilmDistrict)

Angelina Jolie makes her directorial debut with this romance set against the 1992-1995 Bosnian War. When the film was met with early controversy, Jolie was quick to say, it’s “a love story, not a political statement.”

Matt Damon and Scarlett Johansson headline Cameron Crowe’s first film since his 2005 misstep, Elizabethtown. Based on Benjamin Mee’s memoir about the author and his family using their life savings to buy Dartmoor Zoological Park, a dilapidated zoo, replete with 200 exotic animals facing destruction, in the English countryside.

How about a little Christmas counter-programming? Emile Hirsch, Olivia Thirlby and Max Minghella star as a group of friends fighting for survival in Russia after an invasion by aliens that are invisible electric forms.

Based on the 2005 novel by Jonathan Safran Foer, the film – an expected Oscar contender from Stephen Daldry (The Reader, Billy Elliot, The Hours) – follows a 9-year-old boy whose father (Tom Hanks) was killed on 9/11. When he discovers a key that belonged to his dad, he sets off on a hunt around New York to find the lockbox the key will open. Also starring Sandra Bullock, Viola Davis and John Goodman. (Wide release is Jan. 20)

David Fincher’s most likely competitor for Best Director, Steven Spielberg helms this tear-jerking adaptation of both the children’s novel and Tony Award-winning stage production about a young man named Albert and his horse, Joey, who is sold and sent to the trenches of World War I. Despite being too young to enlist, Albert heads to France to save his friend.

After premiering to big buzz at the 2011 Sundance Film Festival and winning the Excellence in Cinematography Award, this story of Alike (Adepero Oduye), a 17-year-old African-American teenager embracing her identity as a lesbian, was compared to Precious.

The Iron Lady (The Weinstein Company)

A biopic about Margaret Thatcher starring Meryl Streep? Why not just start handing out the Oscars now? The only hitch is the film reunites Streep with Phyllida Lloyd, the director of Mamma Mia!, which features possibly the worst performance in Streep’s illustrious career. But here’s their shot at redemption.