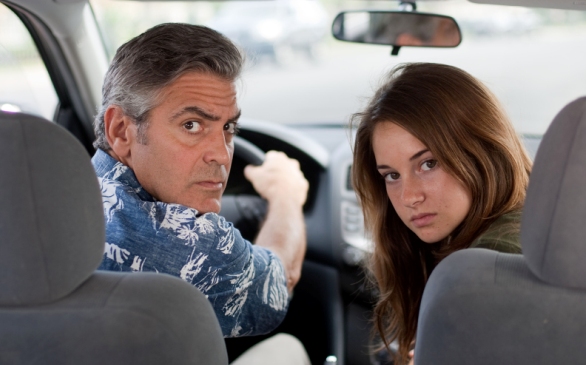 Just like with his other films – Election, About Schmidt, Sideways – writer/director Alexander Payne gives us another humbling, character-driven project with The Descendants. Set in Hawaii, the film’s story is relatively simple, but it rests on the laurels of its complex characters – led by George Clooney in one of his best, albeit most understated performances to date – as well as its humility.

The film begins with a glimpse of a seemingly happy woman on a powerboat, taking the waves in stride. Then, after the opening titles, we are taken into a hospital room where this woman – a mother and wife – is laying in a coma, apparently because of a bad head injury. It is here, through his own narration, that we meet her husband, Matt King (Clooney). Matt is weeding through hospital paperwork, sorting through the details of his wife’s accident, until he gets a call from his daughter’s school, asking him to come in for a chat.

It is here that the tone of the film becomes solidified – there’s some drama, yes, because of Matt’s predicament; but there is instantly some humor, as well. When Matt sits down with the educator at his daughter, Scottie’s, school, they show Matt a book that Scottie has put together: chock full of photos of his wife – her mom – in the hospital, on a ventilator. Matt takes Scottie by the hand and lightly reprimands her, telling her that she’s taking too many photos; and is hit back with her argument that she looked at a book where the famous photographer took tons of pictures of a sick relative; she then asks her dad if they can go get burgers.

This heady mix of drama and lightheartedness is successfully carried throughout the film; and this is obviously where Payne feels comfortable. His other films – the biting Election and heartfelt Sideways included – all utilize wonderful writing to achieve this combination, where real feelings are developed for each and every character.

The Descendants, thankfully, is no exception. After Matt lightly reprimands Scottie at school, we are thrust into his life: Now essentially a single father, Matt now has to balance parenthood (His older daughter is away at school and apparently likes to drink.) with the painstaking decision of how and when to sell off his ancestors’ land in Hawaii. As the story develops, we are left to deal with an assortment of emotions as Matt, among other things, takes his daughters on a sort of goose-chase to tie up some loose ends in his wife’s life.