Eames: The Architect and the Painter 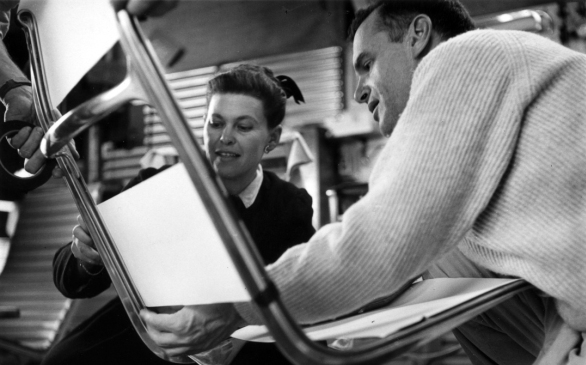 A film filled with vibrant colors and amazing buildings, Eames: The Architect and the Painter screams style. Narrated by James Franco, Eames is the first film to be made about power design couple Charles and Ray Eames since their deaths. It is a beautifully done film that dives deeply inside their lives and explores the link between their artistic collaboration and their sometimes confusing and controversial love for one another.

Even though the duo rocked American design to the very core, and despite their unrivaled impact and influence, the actual personas of Charles and Ray Eames have remained private except for the happy publicity photos they casually sent out to inquiring journalists who wanted to know more about the two while they were alive. In the film, we get to see inside the Eames family and get a glimpse at a cache of archival material, visually stunning films, love letters, photographs and artifacts produced in mind-boggling volume by Charles and Ray alongside their talented staff during the height of the Eames Office.

We learn about Charles and Ray’s destined career pairing, which produced major artistic developments in postwar America. The pair came together and moved to Los Angeles just as California was becoming a viable counterweight to the cultural power of New York. Their light and whimsical designs became symbolic of the California lifestyle that spread rapidly throughout the world, just as American society began shifting away from manufacturing and towards an economy based on ideas and communications. The Eames Office was always a step ahead, featuring exhibitions for prestigious clients including IBM, Westinghouse, Polaroid and the U.S. government; Eames truly pushed their brand to the creative maximum.

Many Eames designs are still seen today. Just as the couple rose to success, the male dominated society pushed Ray to the background and Charles became the face of the Eames brand. It never caused a true rift between the two. Their marriage, though rocky, was kept together by their mutual respect. They were artistic geniuses, and though historians may argue about who was the true creator of the Eames genius, it didn’t matter because Charles and Ray truly cannot be defined separate artists but as a team.

Eames: The Architect and the Painter is a must-see for any art enthusiast and art student who will have a strong appreciation for the film, as they are true pioneers in their industry. Though the film drags on a bit in the middle and loses its basic premise, it picks back up and lands right back on track.

Eames: The Architect and the Painter releases in select theaters Nov. 18.