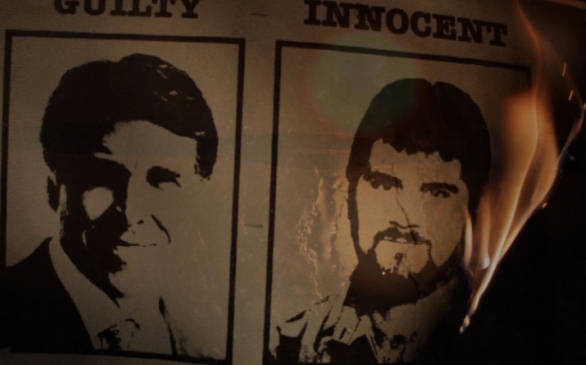 An overwhelming favorite at the SXSW Festival, co-directors Steve Mims and Joe Bailey, Jr. explore the intricate arson forensics surrounding one of the most mysterious cases in Texas history and the polarized public responses to the Todd Willingham execution. Incendiary comes to theaters as one of the most thought-provoking, pulse-pumping documentaries in a long time.

Incendiary tells the story of the infamous Todd Willingham Case. The film investigates the 20-year-old Texas murder mystery, full of scientific twists and political turns that set up for amazing drama. Its world premiere at SXSW won audience acclaim and the Louis Black Special Jury Prize. The thoroughness of the investigative analysis makes it easy to see why it was a documentary 20 years in the making.

The story starts in 1991 when Cameron Todd Willingham’s three daughters died in a mysterious house fire. He is then quickly convicted on sketchy and suspect arson evidence and is sentenced to death for the murder of his children. Despite overwhelming criticism from scientific experts of the prosecution’s “junk science,” he was executed in 2004.The execution started an uproar in Texas and added fire to the continuing national debate on the merits of capitol punishment.

Incendiary: The Willingham Case is the perfect balance of murder mystery, forensic investigation, character development and political drama. Unlike many other documentary films, Incendiary places scientific evidence front and center in a cautionary tale of the battle between science and speculation. We have a chance to see the battle lines drawn between forensic scientist and the public. As they square off, tensions arise between the film’s oversized characters who add unexpected comic overtones to a textbook study of the case and the controversy surrounding it.

While the Willingham case has become a call for reform in forensics and a rallying cry for anti-death penalty protests, Willingham to many Texans remains known as a “savage monster.” Governor Rick Perry, who ignored the science that could have saved Willingham’s life, allegedly was suspected of manipulating a state forensics commission evaluation of the case which he has dismissed as improper scientific criticism. The politics and intrigue allows the viewer to be totally engulfed in the documentary.

Today, the battle continues as both the Texas Fire Marshal’s office and Governor Perry continue to defend the original investigation in contradiction to every examining authority on fire science, which unanimously found no basis for arson. Public battles over Willingham’s conviction and the forensics used to convict him culminate in a courtroom showdown in Austin, Texas – with fireworks and revelations spilling onto the courthouse steps. The dramatic showdown splits the scientific community and god-fearing social groups in two.

Also striking up controversy is that Governor Perry is running for President, which makes you look at Incendiary much more closely. The film does make you question if a political official who seems to have poor judgment could lead the country.