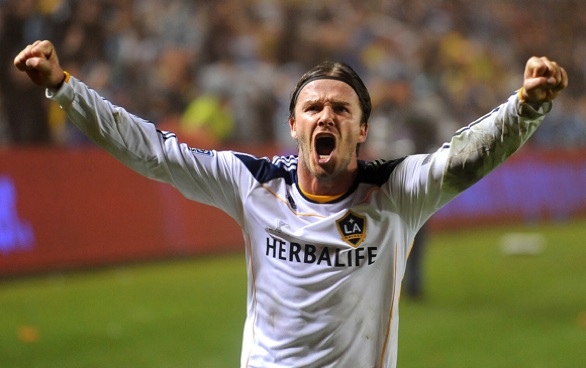 It finally worked. The Los Angeles Galaxy captured its first MLS Cup during its five years with David Beckham.

This is the last year that Beckham is under contract with Los Angeles. There has been a lot of speculation that both sides are working on a new deal, but he has received official offers from over seas teams in Europe, including from England and France.

Despite what happens, Beckham did what he was supposed to do since his opening season with the Galaxy: bring a championship trophy to Los Angeles.

“Being successful always feels good, proving people wrong feels even better,” Beckham tells the media. “We are the Galaxy, we are the biggest club in this country and league, and we are proud to be part of this.”

Carson’s Home Depot Center was filled with spectators, including in the extra portable bleachers and the grass section in the facility’s north side. Nearly 31,000 attended the cold and at-times rainy match, and Beckham gave them a night to remember; it could very well be his last game in white.

“I have been around great competitors and athletes in my career,” coach Bruce Arena states of the Englishman. “He is as good as it comes, he has an unbelievable desire to win. He is a great teammate and a great person, and I am so happy for him. He has done it in every country. What more can you say about the guy and all he has brought to this club and this country?”

Right from the beginning, the affair captured the eyes of the crowd with both sides exchanging physicality on the pitch. Houston had its chances to capitalize on counters, but they could just not convert in the first half. Possession of the ball was key, especially for Houston as they controlled the tempo of the game during the first half, but that did not stop the Galaxy from executing their premeditated strategies.

This is the third MLS Cup title that the Galaxy has ever won, and midfielder Landon Donovan was essential to the team’s season and Sunday night’s victory. Donovan scored the lone goal in the 72nd minute.

After a headed pass from Beckham, Irish forward Robbie Keane took control of the leather before exercising a serious of moves to gather space from the Houston defender. Thereafter, Keane saw Donovan running across and penetrated the ball into the box to his legs. Donovan simply chipped a right-footed shot (laces out) past goalkeeper Tally Hall. Both Beckham and Keane received credit for the assist after Donovan knee-slid into the left flank of the field to celebrate the much-awaited goal.

“This is a sense of elation. It has been a long year, a trying year, and there are times through it all when you get tired and, mentally, you wear down,” Donovan comments to reporters. “This is a special night, and I will remember it forever.”

Meanwhile, the Houston Dynamo coach was receptive to the Galaxy winning on the night. “They were the best team in the league from day one and a deserving champion,” he says. “You can’t look past that.”

Prior to winning this MLS Cup, Donovan had won three before becoming a Galaxy player. Donovan, who is at his prime and unarguably the best athlete of American soccer, could easily have received MVP honors this season.

Donovan is a colossal reason the Galaxy won. However, the likes of Beckham and Keane assisted a lot in the process of the team’s successful postseason run. All three together carried paychecks higher than Houston’s overall player payroll.

Arena, meanwhile, is only getting better at what he does.

“This is a damn good year, it really is," he remarks. A native of Ontario and practically homegrown in Los Angeles, Donovan shows his passion for soccer.

“The actual goal doesn't mean a whole lot to me," Donovan confesses. "The goals come and go, but the moment the whistle blew is what I'll remember."

Beckham, on the other hand, had been injured for the past few games.

“David’s a champion,” Arena sys. “I've been around great athletes, competitors in my life in different sports. And this guy’s as good as it gets. He gutted it out tonight. He obviously wanted to be there.”