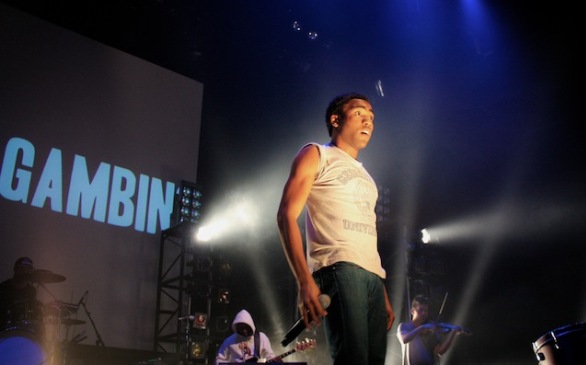 At Donald Glover’s (aka Childish Gambino) recent sold-out show at Club Nokia, he wasn’t funny at all. No stand-up comedy, no skits; something out of the ordinary for the “Community” actor. Instead, Gambino pieced together an awesome performance that exemplified his passion for this musical endeavor (Don’t call it a side project.).

Electrifying the stage for almost two hours, Gambino ran through a majority of his catalogue from his Culdesac mixtape, viral freestyles and his debut effort, Camp (a very good album). Backed by his live band, he erupted onto the stage with “Hero” from Culdesac, sending the very diverse crowd into a raucous frenzy. As he ripped through hits like “Do Ya Like,” “Heartbeat” and “Bonfire,” his loyal following recited the lyrics word for word, which is impressive since half the songs hadn’t officially been released yet.

This was the last stop of the Sign-Up Tour and the final show before Camp dropped so Gambino pulled out all the stops. He climbed on top of speaker tower, paid a visit to his front row fans, utilized a choir for “Outside” and brought out currently-on-hiatus L.A. Clipper Blake Griffin. Gambino received a warm ovation when he thanked the Filipinos in attendance for missing the Pacquiao fight to see him, leading into his quasi ode to Asian girls, “You See Me,” which also won over the local crowd with the UCLA reference in the hook (Bruins must’ve been out in full force,).

As he closed the show with “That Power”, you can sense the passion he has for his music, and honestly, he impressed the hell out of me. It’s no joke that Donald Glover is one of the most dynamic and talented entertainers out right now.