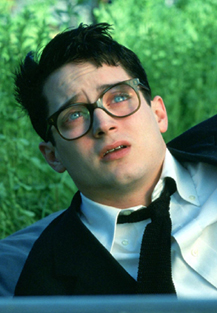 In a feature film based on one peculiar young man’s journey to find his dead grandfather’s savior during World War II, you wouldn’t expect to find many chuckles. But in Everything is Illuminated, Liev Schreiber’s big screen adaptation of Jonathan Safran Foer’s keenly penned 2001 novel, the dire subject matter often gives way to rays of light and moments of exuberance.

The film centers on the author’s journey to a small Ukrainian town that was nearly wiped out by the Nazi invasion. The town is important to our young protagonist because he seeks to meet the brave woman who assisted his beloved grandfather in escaping from that very region soon before the Nazi's swept through and destroyed not only the town, but the lives of all those who called it home.

This journey has consumed Jonathan for some time, as the memories of his extended family are of great importance to him. His room is a veritable shrine to his kin, with small knick-knacks and tchotchkes that he has borrowed from various family members, carefully ensconcing them in Ziploc bags and affixing them to his wall. The most important of which is a small charm belonging to his grandfather, Safran, who, in times long past, escaped that dangerous war zone and moved to America where he started a family that, years later, begot young Jonathan.

Now retired from frolicking in the shire, Elijah Wood fills the shoes of the young author and, though he bears more than a passing resemblance to a post-adolescent Harry Potter with his rounded eyeglasses, he manages to aptly portray his subject’s neurotic vulnerability. With skin so pale it borders on translucent, and a studied countenance that betrays little of what is transpiring beneath, Wood conveys the pent-up emotions of Jonathan mostly with facial expressions, showing a remarkable restraint.

The film’s real revelation, however, is Eugene Katz, who plays Alex, Jonathan’s Ukrainian tour guide and eventual confidante. Plucked from behind the microphone stand of gypsy punk rock band Gogol Bordello, a shamble-chic eight piece that’s garnered considerable indie acclaim with their border-spanning cacophonies, Katz drives the film’s dialogue and imbues his every scene with a naïve earnestness. His faux hip-hop style and curiously phrased questions (a result of learning English as a second language) also provide many of the film’s lighter moments.

Everything is Illuminated is at once a search for something that may or may not exist, and a destination in and of itself. Our protagonist Jonathan knows that he is seeking something, but begins to realize that the journey is as important as the object of his travels and that the people you meet along the way are the ones that make it that way.