Getting Fit the 'Skyrim' Way 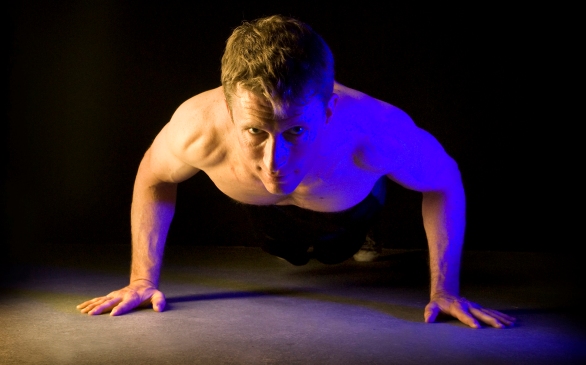 A new fitness program that asks gamers to earn time gaming by exercising is targeting fans of one of the biggest releases of the year. “Skyrim Fitness” pushes players of Bethesda Softwork’s latest massive fantasy role-playing game to do 10 push-ups to earn an hour of time in a world that can take 60, 80, 100 hours to fully play and explore. Yes, that could mean hardcore gamers who wrap up playing through “The Elder Scrolls V: Skyrim” also rack up 1,000 push-ups.

Jason Cross, senior editor at PCWorld, kicked off the “Skyrim” fitness program the day before the game hit shelves last week. To make it a bit easier to track, and a bit more fun to participate in, he tied it to community fitness Web site Fitocracy. Fitocracy, which is still in beta, is a Web site that allows people to track their workouts and earn points that are used to level up their account. While the Web site and the “Skyrim Fitness” program both use the honor system, trusting people to be honest about their workouts, there seems no point in joining if your intention is to lie your way through the game.

Cross ssays he signed up for the Fitocracy beta a couple of weeks ago to see what all of the hoopla was about. Tying a role-playing game fitness program to a fitness program role-playing game seems like a perfect fit. The idea of creating a group in Fitocracy dedicated to “Skyrim” players, and then suggesting everyone workout to earn playtime just popped into his head, Cross says.

“I figured I would be spending a whole lot of time on just one game over the next few weeks,” he says. “It’s certainly not completely original: Gamers have done exercises as ‘punishment’ for losing rounds in ‘Starcraft 2’ or ‘League of Legends,’ or during the long wait of flight paths in ‘World of Warcraft.’ Some have set up computers or consoles so they can play while on their treadmills or exercise bikes. I just thought it was be a good way to break up an otherwise sedentary game with a little exercise.”

Cross settled on “Skyrim” because he felt it was the best fit. It’s a single-player game, so one can take breaks more easily. Also, it’s the sort of game that inevitably sucks up a lot of time, which could mean a lot of push-ups. While Cross suggests players do 10 push-ups for every hour of gameplay, he’s following a tougher schedule.

“I’m personally doing 12 push-ups, and I’ll increase that by two every 10 hours of cumulative game time,” he says.

The reaction to Cross’ idea, first presented on Google+ and then on the Web site Reddit, has been overwhelmingly positive. Nearly 200 people have already joined the Fitocracy group and plenty of people are coming up with their own tweaks on Cross’ “Skyrim” fitness plan.

“The biggest criticism seems to be from users that claim 10 push-ups is a trivial amount for any grown person and that the hourly number should be far higher,” Cross says. “In truth, there are plenty of gamers who struggle to do 10 push-ups. They’re harder than you think if you follow proper form and pace. Many people are substituting the push-ups with 20 crunches or five pull-ups or what-have-you, which is totally fine. It’s not meant to replace the gym, and it’s not going to make the extra pounds melt off or buff you up. It’s only meant to be a little physical activity to make your briefly exert yourself and take breaks while you play in a way that’s fast and easy enough to do in your living room or den. If it’s not something you’ll stick with, it’s worthless.”

While “Skyrim Fitness” is a neat idea, Cross reminds that it’s not meant to be a complete fitness program.

“It’s just meant to be a lot better than simply sitting in front of the screen for hours on end,” he says. “While it won’t turn you into an Adonis, I’m pretty sure you’ll notice a difference if you play 100 hours of ‘Skyrim’ over the next month. 1000 push-ups in a month is not trivial.”