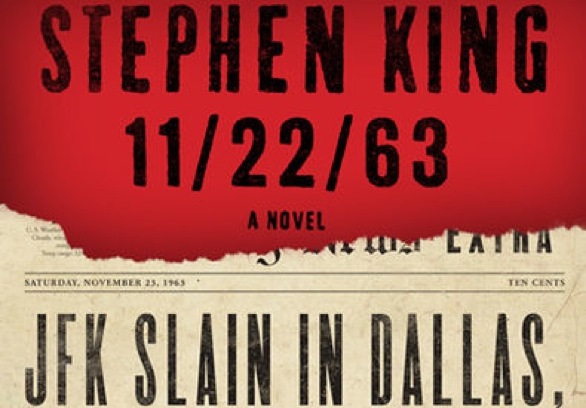 If you like history and you love Stephen King, good news arrives in the form of 11/22/63, his latest novel and one of the most ambitious tales he’s crafted.

The book begins innocently enough as we meet a high school English teacher, Jake Epping, in – where else? – a small town in Maine. Epping has just endured a divorce and is teaching adult English to a GED class to pick up a few extra bucks.

One of the essays he reads, written by no less than the high school janitor, moves him to tears. And as Jake tells us many times throughout the book, he is not a crying man. How can he not cry when the janitor, Harry, spills his life story onto cheap notebook paper, remembering the night in 1958 when his father “murdirt my mother and two brothers and hurt me bad.”

That essay leads Jake to attend Harry’s GED graduation and take him for a celebratory burger to a diner, Al’s. And going to Al’s is the event that makes Jake’s life turn on a dime, because the diner’s owner has a secret. Now that he’s dying of cancer, he must share it with someone he can trust. Someone who’s single (that convenient divorce) and childless. And Al decides Jake is the one he’ll tell his secret – that he has found a hole, a ripple, whatever you want to call it – that lets him travel back in time to 1958.

King is at his finest describing the shock and sense of wonder Jake feels when he takes his first trip back to a Maine street he never knew. Where everybody smokes. Where a thick fountain root beer costs a dime. And where kids still know their manners, like this: “‘Yes sir?’ Sir, yet. And nothing sarcastic about it. I was deciding that 1958 had been a pretty good year. Aside from the stench of the mill and the cigarette smoke, that was.”

And no matter how long Jake – or Al before him – stays when they travel back to 1958, when they come back to 2011 Maine, only two minutes have passed. Now Jake must decide whether he will fulfill Al’s dying request – to go back in time and somehow stop Lee Harvey Oswald from killing the president in Dallas in 1963.

Much of this satisfying tale is told in the details as King lavishes us with descriptions and behaviors of the late ’50s and early ’60s, as seen from Jake’s point of view. The music, the gigantic cars, the cheap gas and the unshaken assumption that America is the land of the free, home of the brave – for the most part.

As Jake travels back to the 1950s, he becomes George Amberson. In one of King’s regular touches, he also crosses paths with people, places and characters from earlier books. He makes a stop in Derry, home of It, where he also meets up with Bev and Richie. A red and white Plymouth Fury, just like Christine, makes more than one appearance.

The evil that awaits in Dallas is much like the evil he finds in Derry. Knowing that, he changes his original plan to live in Dallas to await Oswald and moves instead to a town called Jodie. And it’s in Jodie where his plan to stop the assassination hits all sorts of complications. In the newly arrived school librarian, Sadie. In his loathing of Dallas. And in his efforts to track Oswald’s comings, goings and conversations along the way.

King is a master, too, at reminding us of just how easy things have become in 2011. Jake longs for the easy information access of the Internet and his cell phone. But he also revels in the kindness of strangers and the ease of plopping down money to buy a gun or get on a plane and other niceties long gone.