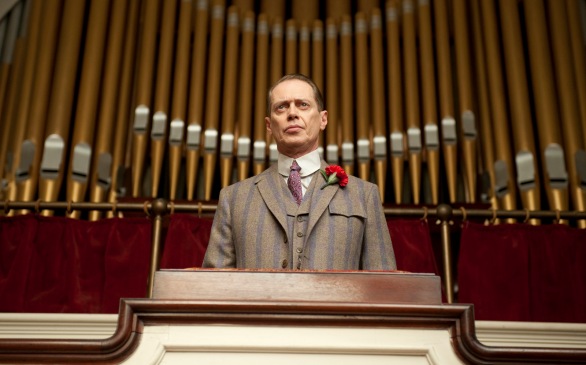 Vampires, zombies, serial killers and a host of other evildoers roam wild over the pop culture landscape. And when they come to prime time, you can be sure there will be blood.

The flesh-eating undead of AMC’s “The Walking Dead” relentlessly stalk survivors. Bloodsuckers and blood lust – among other forms of lust – abound in HBO’s “True Blood.” The serial killer of serial killers, Dexter Morgan, carries out his own brutal brand of vigilante justice on Showtime’s “Dexter.” And creative homicidal psychopaths routinely keep the dogged investigators from “Criminal Minds,” “Bones” and the “CSI” franchises on their toes.

But while splatter and gore are essential – and expected parts of the DNA of those popular dramas - extreme, unflinching acts of graphic, stomach-churning violence have been spilling into an unexpected arena: television’s elite dramas. AMC’s “Breaking Bad,” HBO’s “Boardwalk Empire” and FX’s “Sons of Anarchy,” among other shows, have long enjoyed critical praise for interweaving complex character studies, intricate plots and high production values. But this season these quality programs have unveiled a new level of savagery.

Violence in television is, of course, not new. What is new – at least in this class of programming - is the unsparing detail with which it’s being displayed, not to mention the inventiveness employed in showcasing the hacking, dismembering and killing. For these shows, the “graphic violence” label before the opening credits isn’t just an advisory, it’s a warning.

The Prohibition-era mobster tale “Boardwalk Empire,” which received 18 Emmy nominations this year, has featured a close-up of a man getting his head caved in by a heavy wrench, the scalping of a veteran of the American-Indian Wars and the slaying of a man hanging upside down in a butcher shop pleading for his life before getting his throat sliced open with a freshly sharpened blade.

The fourth-season opener of “Breaking Bad,” whose leading man, Bryan Cranston, has won three Emmys for his gritty portrayal of a chemistry teacher turned meth maker, saw drug kingpin Gustavo Fring (Giancarlo Esposito) don plastic overalls before slashing the throat of an accomplice with a box cutter. In the season finale, the karmic wheel of fortune turned against Gus as he fell victim to a revenge bombing plot that blew off half his face.

Even though the A-list bloodshed occurs on premium and basic cable, where standards for violence are far looser than on the major networks, the extreme acts have provoked sharp reaction from some of the shows’ most adoring critics. Of “Boardwalk Empire’s” wrench and scalping scenes – which occurred in the same episode – Matt Zoller Seitz of Salon.com calls them “two spectacular acts of violence that played like textbook examples of a show trying to jack up its excitement level with ‘Oh my God, I can’t believe they did that’ mayhem.” He says the scenes “cheerfully confirmed the show’s allegiance to the worst impulses of Martin Scorsese and ‘The Sopranos’” – the tendency to spotlight macho one-upmanship “in the most gruesome terms imaginable.”

USA Today writer Scott Bowles argued that “Breaking Bad” “is pushing how much violence basic cable can get away with.” Even Kurt Sutter, the creator of “Sons of Anarchy,” maintained that he was taken aback by some of the rawness in “Boardwalk Empire.”

“I found the head bashing much more disturbing than the scalping,” he says. “Sometimes violence that’s left to the imagination is much more vivid and dark than what can be shown on-screen. The audience doesn’t have to unplug as much.”

The depictions of violence could actually be more graphic – “We self-edit a lot,” says Terence Winter, creator of “Boardwalk Empire.”

Still, the key forces behind these shows maintain that while the violence may be disturbing and vivid, it is included to serve the story, the characters and realism – not for shock value. “I never intended ‘Breaking Bad’ to be a show for the whole family. It’s certainly not for children or for every adult,” says Vince Gilligan, the show’s creator. “It’s a show for people who are comfortable watching an unflinching representation of a very real life situation and problem – the international drug trade. There are moments we’re not going to shrink from. We don’t try to shock, but it is our intention to show in a very adult and realistic way the consequences of bad decision making.”

Gilligan adds: “If one of our villains cuts a man’s throat, it seems to me that the most honest way to portray that is to show how horrible that reality is, and to show it in as unflinching a manner as possible. It may be uncomfortable to watch, but to not show it that way is a disservice to real life.”

Winter defends the violence on “Boardwalk Empire,” which stars Steve Buscemi as political boss Nucky Thompson, as appropriate for the themes explored in a gangster drama.

“If there’s an increase in violence, it’s due to the circumstances on the show, where everybody is under pressure,” Winter says. “In terms of how we show violence, it’s meant to be disturbing and jarring.”

Winter, a former writer and executive producer on HBO’s landmark series “The Sopranos,” compared “Boardwalk” to his previous series: “There has to be a point where the audience says, ‘These are horrible people. They’re not supposed to be likable. They’re killers.’”

Sutter’s “Sons of Anarchy” is characteristically less graphically violent than most of the other shows, though he points out that the series “takes place in a fairly dangerous world.” Referring to the scene where Juice shoots his attacker in the face, Sutter explained that the story needed “something graphic that Juice would feel responsible for and would push him over the edge. It needed to be extreme. But I always try to root these things in character and the world so that it never crosses the line into being gratuitous.”

And television writers maintain they have their limits. Winter chuckles as he says, “I will never show Nucky Thompson eating the intestines of a dead body.”

To be sure, all these series are set in dark, violent worlds (both “Breaking Bad” and “Sons of Anarchy” take place against the background of illegal drugs) and are centered on deeply flawed antiheroes. Audiences may simply have become anesthetized to TV violence, which has been steadily ratcheting up in noteworthy series, including “The Sopranos,” “The Wire,” “The Shield” and “Deadwood.”

The topic remains a delicate one – several network heads declined to comment on the issue. FX President John Landgraf, who has overseen “The Shield” and “Sons of Anarchy,” says the top creators of TV’s violence-charged dramas are following in the tradition of Shakespeare, displaying artistry comparable to that of acclaimed filmmakers such as Scorsese and Francis Ford Coppola (The Godfather).

“There was a time when this sort of artful work was only being done in films,” Landgraf says. “There has been this migration of some of the finest creative minds into television. But some cultural observers suggest another spark fueling the extreme violence: the influence of the Internet.”

“There are no limits on the Web,” says Jeffrey Cole, director of USC’s Annenberg School for the Digital Future. “And there is competitive pressure on TV to show more provocative content.”

Cole, who has conducted prominent studies on television violence for network and national government use, adds, “Graphic violence now has gotten to be very artistic, and some of the special effects indeed are very cool.”

But viewers who focus on violence can miss the point, Gilligan says. Far more disturbing than the carnage in “Breaking Bad” is the emotional wreckage its protagonist, Walter White, brings upon himself, his family, friends and others.

“The bloodshed does not stick with me as much as the lies Walt tells,” he says. “And unfortunately, the horrible things that happen on this show don’t hold a candle to much of what goes on in real life.”