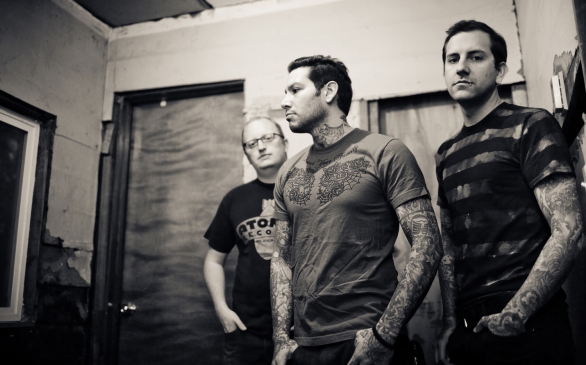 MxPx: Both Ends Burning
Bremerton, Wash. punk trio MxPx is about to release a music documentary entitled Both Ends Burning that features footage from their 2008 world tour as well as from their sold-out Seattle show last March. The film is said to be a brutally honest depiction of how MxPx found themselves at a crossroads in their career, struggling to find the balance between full-time jobs and lives as touring musicians. Drummer Yuri Ruley and guitarist Tom Wisniewski both had second thoughts about staying in the band back in 2010; both eventually decided to stick around when the group’s touring schedule was pared back.
In addition to featuring some of the band’s travel experiences and remedies to handling conflict, many of the band’s peers from groups like Less Than Jake, the Descendents, Relient K and A Day to Remember appear in interview segments. Both Ends Burning is available digitally on Dec. 1 and on DVD Dec. 8. A new MxPx album is scheduled to drop in early 2012.

Black Sabbath Reunites
After much speculation the original four members of Black Sabbath – Ozzy Osbourne, Tony Iommi, Geezer Butler and Bill Ward – have reunited to record their first new studio album in 33 years. The legendary heavy metal band will be working in the studio with the equally revered producer Rick Rubin. The band made the announcement at a Nov. 11 press conference at the Whisky a Go-Go, the place where Sabbath played their first L.A. concert 41 years ago to the day.
The new album is as yet untitled, and the release date in 2012 is yet to be determined. Fans can finally get official band information online though; BlackSabbath.com is the first-ever authorized site for Black Sabbath news. In another first, Black Sabbath will be making their initial foray into social media through a presence on Facebook and Twitter.

Strictly the Best Reggae
Reggae label VP Records has just released the 44th and 45th titles in their Strictly the Best series of various artists’ compilations. Strictly the Best Vol. 44 rallies the most in-demand roots and lover’s rock singers for a set from artists like Beres Hammond, Tarrus Riley, Gyptian, Queen Ifrica, Freddie McGregor and Etana. Vol. 45 contains the season’s most popular cutting-edge dancehall anthems that have been banging in the clubs and on Caribbean radio and features Mavado, Damian ‘Jr. Gong’ Marley, Sean Paul, Bounty Killer, Tifa, Laza Morgan and many others.

Half Notes
Fans of Japanese group L’Arc-en-Ciel will have one shot at seeing the band’s 20th anniversary concert film in select theaters in major cities across the country on Tuesday, Nov. 29. 2 Days Live at Tokyo Ajinomoto Stadium, featuring a full concert and footage tracing the band’s colorful history, will screen locally at the Rave 18 in Los Angeles and the Stadium Promenade in Orange. Tickets are available online only at bit.ly/larcenciel; tickets for the one-night-only event will not be sold at theater box offices.

Thenewno2, led by Dhani Harrison, the son of late Beatle George Harrison, is celebrating the release of their EP002 by giving away a Fender Pawn Shop Mustang Special guitar from Fender’s new Pawn Shop line. Sign up at the band’s Facebook page.

Scott Hansen, also known as graphic artist ISO50, has just released a new album called Dive under his musical moniker, Tycho. “Nostalgia is a common thread in my work,” says Hansen, “But this album wasn’t driven by that idea. I see these songs as artifacts from a future which might have more in common with our past than our present.” Hear for yourself when Tycho plays the Echo on Dec. 8.

If you haven’t been out to the Bootleg Theater yet to catch Little Hurricane during their November residency, you have one more chance. Hear the San Diegans play some of their new material on Monday the 28th.