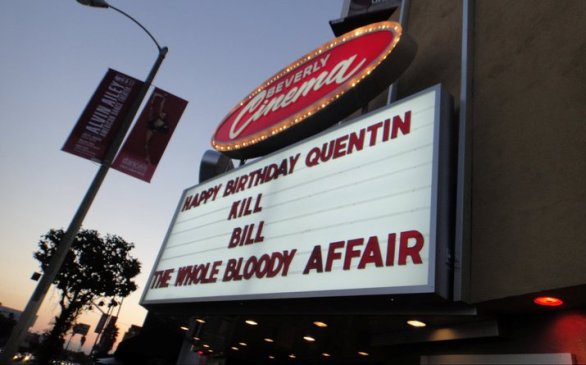 Film screenings of beloved films using original 35mm prints is perhaps one of the most unique activities in Los Angeles. Around town, famed movie theaters like the Egyptian or revival houses like the New Beverly screen a variety of films ranging from classics to contemporary favorites. Just a few weekends ago, the New Beverly hosted its monthly midnight screening of Scott Pilgrim vs. the World complete with the director, Edgar Wright, and cast members making appearances. Film lovers donned costumes or clothes to show devotion – you might have caught a glimpse of a Ramona Flowers or two.

It’s also become an L.A. tradition at screenings to have people involved with the film to be in attendance for Q&A sessions. These discussions turn out to be more like a gathering of film lovers hanging out and sharing a passion for the art of film. Where else could you ask about the filmmaking experience or share stories about how a film has impacted you? It’s truly an experience to take your seat, hear the hum of the projector and view films as intended – on film – with a community of like-minded fanatics.

This staple of the L.A. experience is heading toward a major change. Major movie studios have decided to stop rental of all archival film prints since the switch to digital has become a more efficient means to make and distribute movies. However, locking up original prints and preventing them from being viewed could be likened to books being put out of print completely in favor of digital readers or even just first-edition books not being put on display.

35mm film is a huge part of the history of filmmaking. Studios are doing generations of viewers a disservice by circumventing access to tangible cultural knowledge of a major contribution man has made to not only the art of storytelling-but to communication. As long as there are places willing to impart this history to an audience, there should be no reason to stop the passing down of a beloved tradition.

Every state celebrates what they are known for, and California is known for being the birthplace of the movie industry. Screenings using original film are enjoyed by natives, people who want to pursue a career in the industry, cinephiles and tourists. We reserve the right to continue to celebrate our trademark with everyone who wants to partake in our culture.

Julia Marchese, of the New Beverly, has started a petition to show the big movie studios that we want to keep this part of history alive. Go to: thepetitionsite.com/1/fight-for-35mm/ and sign!