A Dangerous Method: Viggo Mortensen is up for all challenges. 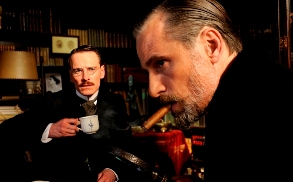 Viggo Mortensen, who has played an orc-battling hero, a survivor of a mysterious apocalypse and a violent Russian gangster in his film career, was a bit scared. But he was ready to deal with the situation that arose this month in Spain.

“I haven’t done a play in 24 years,” Mortensen says from Madrid. “It was kind of a scary undertaking.”

The actor has faced many challenging undertakings lately. His movie A Dangerous Method opens in limited release Wednesday, and next year he’ll star in two other big-budget Hollywood films. He has also found time to perform, in Spanish, in Ariel Dorfman’s “Purgatorio” at Madrid’s Matadero Naves del Espanol. Mortensen says that during rehearsals for “Purgatorio” he sometimes thought he “should have picked something easier.”

“It’s just two characters, and it’s an hour and 45 minutes,” he says, with no intermission. “Any mistake you make is live, and it can go off the rails. Also, in the script, there’s a lot of repetition and a lot of strange things about time.”

The last time Mortensen was in a live stage production was when he first moved to Los Angeles and starred in Martin Sherman’s West Coast premiere of “Bent.” He’s come a long way since then, with the massively popular Lord of the Rings trilogy and critically acclaimed roles in The Road and A History of Violence to his credit. A Dangerous Method, a film by David Cronenberg, will add to that list.

Mortensen plays Austrian physician and neurologist Sigmund Freud. The film, based on a true story, was shot on location in Vienna. It looks at how the intense relationship between Dr. Carl Jung, Sabina Spielrein and Freud gave rise to psychoanalysis. Sony Pictures Classics describes the film as a “dark tale of sexual and intellectual discovery.”

Seduced by the challenge of a case, the driven Jung (Michael Fassbender) takes the unbalanced, beautiful Sabina (Keira Knightley) as his patient. He tries out Freud’s then-experimental treatment known as psychoanalysis, or “the talking cure,” on Sabina. The treatment uncovers a disturbing sexual element to her dysfunction, which upholds Freud’s theories, connecting sexuality to emotional disorders. After being influenced by another patient, Jung pushes aside his own ethics and gives in to his feelings for Sabina, violating the doctor/patient relationship.

Freud and Jung begin to grow apart due to their clashing ideologies. The movie is set prior to World War I, when Jung was 29 and Freud was in his early 50s.

Mortensen says he wouldn’t have considered taking on the role of Freud if anybody but Cronenberg was directing. Mortensen also worked with him in 2005’s A History of Violence and 2007’s Eastern Promises.

“If another director would have offered it to me I would have said, ‘You’re crazy, I’m not the right actor for that role,’” Mortensen says. “I don’t even look like the guy, much less sound like him.”

But his trust in Cronenberg won out.

“He’s the last person in the world who wants to miscast his movies,” he says. “I’m glad I said yes and did the work to research to find a way to play [Freud], which I really enjoyed.” Mortensen says he did a lot of legwork for the role, including visiting Vienna, where Freud lived, and Freud’s birthplace in Moravia (now the Czech Republic) and reading everything about Freud he could get his hands on.

He says a challenge he faced was that there is an immense amount of talking in the film. A lot of the film’s dialogue was taken directly from the correspondence between Freud, Jung and Spielrein. Through that talking and research, he found out some interesting things about Freud.

“He was witty, and he really loved satire,” Mortensen says. “He met and got along great with Mark Twain.”

And Freud had a great sense of humor.

“That’s not something I considered before,” Mortensen says. “Once I got a handle on that, it helped me in a way trying to frame the character. In some subtle ways, he shows comic relief in the movie.”

Mortensen is happy overall with A Dangerous Method.

“I feel proud of the performance,” he says. “It’s not the kind of character I played before. But as with anything new, it’s scary at first until you figure out how to do it.”

Those are challenges he enjoys, Mortensen says, and are conducive to learning new things.

“But you learn a lot more when your back is up against the wall creatively, and you have to find a way to make it work and live up to what the director thinks you can do.”

Mortensen recalls his 2009 movie, The Road, the post-apocalyptic film based on the Pulitzer Prize-winning book by Cormac McCarthy, which also was released Thanksgiving week.

“It was a good movie, but a tough movie,” he says.

People who saw The Road told the actor they enjoyed it.

Mortensen is also a short story writer and a photographer. In 2002 he founded Perceval Press, which focuses on art, critical writing and poetry. Asked if he’s written any screenplays, he says he’s written two but they are “unusual stories,” out of the mainstream.

“But someday, it’d be fun to see one of them made into a movie, or both of them,” he says. “Maybe I could even try directing one; I’d like to try it.”

He adds, “I like writing, photography, acting, and I like actors. A lot of directors, I’m not sure if they like actors. They find them as useful tools and not much more. People like David Cronenberg like actors and understand them and how to get their best work out of them. Maybe someday I’ll be lucky enough to direct a movie and see how that is.”

In 2012, Mortensen can be seen in On the Road, which has been completed, and in Everyone Has a Plan, which is in post-production. On the Road is adapted from the 1957 book by Jack Kerouac that described his trip with friends across the United States. The novel was a foundation of the Beat Generation. Mortensen plays Old Bull Lee, a fictionalized character based on the writer William S. Burroughs.

“That was a lot of fun,” he says. “It was a beautifully shot movie, and that ought to be interesting to watch.” Everyone Has a Plan, a crime drama, was filmed in Argentina, where Mortensen spent much of his childhood. His father managed a large farm in the Pampas (plains).

“I play an identical twin, which was an interesting challenge,” Mortensen says.

Despite having his hands full acting in “Purgatorio” and promoting A Dangerous Method, but don’t worry if you recognize him and want to say hello. That doesn’t happen as much as it did during his Lord of the Rings days, but he is always nice to strangers who do stop him.

“I tend to mind my own business, and most people respect that,” he says. “I’m always grateful when somebody notices me and says hello and they like my work. That is always flattering.”