Shame: Steve McQueen and Michael Fassbender are a duo to be reckoned with. 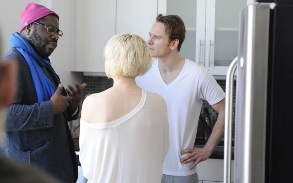 Writer/director Steve McQueen with Carey Mulligan and Michael Fassbender on the set of Shame
(Credit: Courtesy of Fox Searchlight)

With so many taboo topics in our society that rarely get mentioned, it’s promising to know that one is being brought to light and given serious screen time. Countless types of addictions are disregarded and disparaged, but that is not the case in director Steve McQueen’s newest feature film, Shame.

Perhaps that’s why this film is garnering all sorts of attention for both its content and its talent. It stars Michael Fassbender (Inglourious Basterds, X-Men: First Class) as Brandon, a man seemingly in control of his life, who gets an unwelcome pro-longed visit from his sister Sissy (An Education star Carey Mulligan). All of a sudden, secrets he had hidden start to become exposed, unraveling his very fragile existence.

I wondered what drew McQueen, who co-wrote the film with Abi Morgan, to tell this story.

“This is a huge phenomenon that no one is talking about. It’s not just about sex addiction, but addictions in general and being in a world where we don’t necessarily have self-will. It’s not always pretty to look at,” explains McQueen, a native Londoner. He goes on to continue, “No one in London wanted to talk about this and shied away from the spotlight. Ultimately I was introduced to people who suffer from this affliction in New York and naturally thought to shoot it there.”

Fassbender adds, “Great set to be on, amazing crew. We were jumping around like kids too because we were filming in New York, which is always fun.”

This isn’t the first time the two have collaborated. McQueen directed Fassbender in 2008’s Hunger, and they are teaming up for a third film (Twelve Years a Slave).

Fassbender jumps in on a more serious note, “It’s a hard thing to put your finger on, but it’s a chemistry. I am very grateful and feel so blessed to come across it; [McQueen is] a true collaborator. Hunger was a big break for me, and together we were experiencing a lot. We formed a language very quickly.”

McQueen states as well: “I’m very happy for it.”

The director doesn’t tell stories that are for the faint of heart. He knows that he struck gold with Fassbender as the right actor to play Brandon.

Effusing a bit, he says, “We don’t often see an actor like him at all. There is an extraordinary openness and tenderness to him, which is such an appeal. To be able to be so vulnerable.”

Turning to Fassbender, he laughs and asks, “Did I embarrass you?”

Graciously accepting the compliments, Fassbender comments, “A very big part of my preparation is really reading the script, like 300 times to really know the character. You’re gathering little pieces, and Steve is there to steer me in the right direction as well.”

A buzzed about concern is the film’s NC-17 rating due to the amount of nudity. Fassbender was shocked by people’s reaction to that.

“I kept hearing people saying, ‘Oh no, what’s this going to do to your career? You’re naked!’ But I say, ‘I’m not a politician, my job is to facilitate characters.’ I’m a storyteller. That’s it, end of story.”

McQueen adds, “You’re an actor. You can’t show a bit of reality, but all of it. You have to be able to put yourself out there.” Knowing that there were some very intimate scenes to be filmed, the mood of the set had to be just right.

Joking, Fassbender chuckles, “We had a lot of fluffers around the set.”

McQueen laughs and immediately retorts, “Why in the world would you say that?! From catering to makeup, to hair to sound grips and gaffers, we created an atmosphere where everyone knew each other. A safe environment so that people felt free to take risks.”

Asked if Fassbender has seen the film, he replies, “I’ve only seen it once, and it was all a bit overwhelming and [it was] sort of with my eyes closed [grinning]. I need to watch it again back in London and hopefully with Steve and not with a thousand people.”