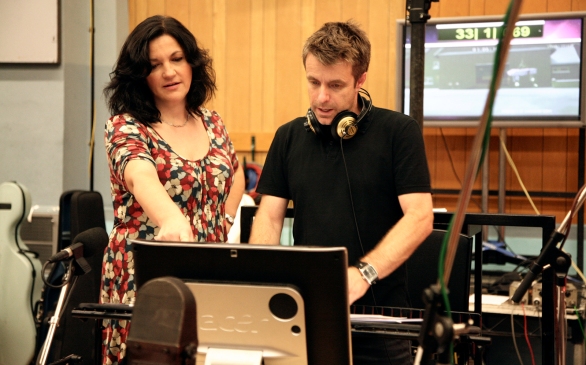 How does Santa deliver millions of presents around the world in one night? It sure isn’t through riding the good old sleigh and going the down the sooty chimney, or at least not for the modern day Santa that is in Arthur Christmas, the 3D, CG-animated family comedy that reveals Father Christmas’ ultra-high-tech undercover operation hidden underneath the snowy grounds of the North Pole. In Arthur Christmas, Santa goes aboard the S-1, a jet that can rival the security of Air Force One and the magnanimity of Star Trek’s the Enterprise, with an army of elves that assist the chubby old man to get down the electric chimney.

“What does it really take for Santa to deliver two million presents in an hour to the entire world? And as soon as you start to think about that your imagination runs wild to create that world. And then something goes wrong. Those are the two central ideas that really sparked the whole movie,” explains Sarah Smith, who directed and co-wrote the animated film. Coming from a background in British comedy writing, this is Smith’s feature animated film directorial debut.

“When we were actually writing I never knew that [it was going to be in 3D]. When you’re writing a screenplay you don’t really think that it’s going to be animated, you think about it being in the real world,” she says.

Santa is not the only star of the film, but his eccentric family shines as well, which includes Arthur (James McAvoy), his youngest, wildly enthusiastic and eager son; Steve (Hugh Laurie), his oldest and heir to the Claus reign; Mrs. Santa (Imelda Staunton), his supportive First Lady; and Grandsanta (Bill Nighy), former reigning Santa Claus who insists throughout the whole movie, “I could still do it now! And I wouldn’t need a trillion elves in bleepy hats.”

“We had to figure out how many children there are in the world, how many presents they’d get, how long it would take to travel. Then we researched the distance between all of the places that Arthur and Grandsanta fly to. We worked out how fast the sleigh would need to fly with eight reindeers for Grandsanta to get around the world back in the day. Then what happens if they lose a reindeer – now how fast do they fly?” Smith reveals about the long process of making Arthur Chrismas.

Although getting the technical stuff right for the movie was important, the heart of it was still central to it all.

“The biggest principle [co-writer] Pete [Baynham] and I worked by when we were writing the movie was that we wanted to feel the emotion ourselves, the truthfulness of it. It was important to us not to borrow the emotion, but to have it come from a real place. And because the movie has our genuine emotions in it, the final result is a film that is very special to us.”

“I think the whole point of the movie in a way is that calling on what’s necessary and having their own place in the world. When we were working on the design of the movie and the sort of modern and high-tech play I want children to go ‘Wow, that’s so cool!’ And when they see the old, traditional play I want them to go, ‘Awww,’” Smith laughs.

Talking about the beginnings of the project she says, “Pete is one of my oldest friends and collaborators. He rang me up and said, ‘I think I’ve had one of the best ideas I’ve ever had – and he pitched me the idea for Arthur Christmas. I loved it from the beginning. It’s a big, emotional, funny story – my favorite.” Although having a baby in the middle of the making the movie, Smith couldn’t be more excited of the entire operation.

“It’s been quite an experience. It’s been an amazing time and privilege to make this type of animated movie. It’s been a fantastic process. You get contributions from people who are amazing at what they are doing. And it takes a crazy long time!” she says with laughter.

When asked who’s her favorite character in the film, she answers, “I love Grandsanta, just because he’s so naughty!”

Interviews
Maleficent doubts her fitness as a mother. So did Angelina Jolie
897 views