(The Weinstein Company)
By Abbi Toushin 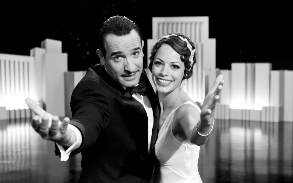 Jean Dujardin as George Valentin and Berenice Bejo as Peppy Miller in The Artist
(Credit: The Weinstein Company)

In the current filmic landscape, which is overstuffed with things like CGI and 3-D, it’s extremely refreshing to have a movie like The Artist make its way into theaters. Filmed in letterbox format, in black and white and with no dialogue – that’s right, it’s a silent film! – The Artist is definitely worth a look.

Directed by Michael Hazanavicius, whose last two credits are the French-language OSS-117 films (Lost in Rio and Cairo, Nest of Spies), The Artist centers around silent movie star George Valentin (Jean Dujardin), a good-looking, extremely charismatic actor who has made dozens of movies and who is loved by the ladies.

He’s a little bit pompous and slightly egocentric, and, in 1920s Hollywood – with the advent of the talkie looming – insists that actors in movies should be seen and not heard. This is why, when the studio boss (played by John Goodman) commissions George to star in a dialogue-heavy movie, he refuses; instead vowing to spend his own money to make another silent picture; after all, he is a movie star.

Sadly for George, however, this is a time of rigorous change in Hollywood. While he begins to stumble down a slippery slope, he sees a young ingénue whom he once sparked with, Peppy Miller (Bérénice Bejo), begin to climb the Hollywood ranks. It’s out with the old and in with the new – as is the way of the movie industry – and George begins to feel this more than anyone else. He’s stuck in his ways and holds onto his belief that movie audiences do not pay to hear him speak.

While the premise of The Artist is simple – and somewhat predictable at times – it is definitely unique in the way it chooses to tell its story. The film’s opening is a movie within a movie, with George and his costar (Missi Pyle) escaping from trouble. The images are black and white, and there is no dialogue – only orchestra music – as the scene plays out. When this “film” concludes, one expects the screen to shift to color and for dialogue to suddenly start pouring out of the movie theater’s speakers. This does not happen, however, and before you know it, you’re sitting in the middle of a dimmed theater in 2011 actually engrossed in a silent picture.

Original? Yes. Brilliant? Even more so.