My Week With Marilyn

(The Weinstein Company)
By Kristina Bravo 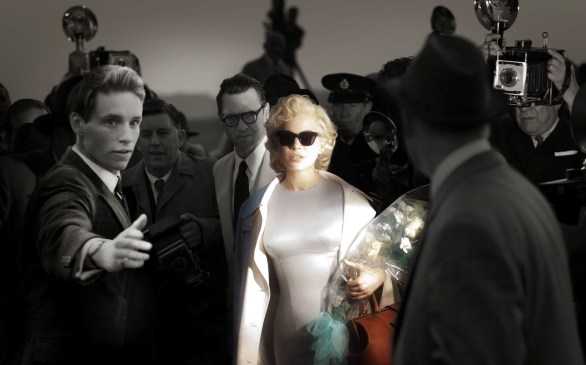 The name Marilyn Monroe evokes an image of an eternal sex pot: those alluring red lips, perfectly curled blond hair and a ridiculously proportioned figure that can easily trump the Pilates-trained, organic-fed body of today’s modern starlet. Director Simon Curtis ventured to go beyond this impeccable facade, and with My Week With Marilyn, he does just that.

“[She was] scared, insecure, frantic, sometimes impossible – but at the same time vulnerable, sweet, endearing, just a young girl, really. So I thought this … could make her human again,” says Adrian Hodges, the man who wrote the screenplay of My Week with Marilyn.

The movie highlights the experience of 23-year-old Colin Clark, who worked as the third assistant director on the set of The Prince and the Showgirl, in which Monroe acts opposite British great Sir Laurence Olivier. With her crippling self-consciousness, then unusual practice of method acting and disregard for punctuality, the American movie star found very few friends on set except for Clark. And in the magical week during which he escorts the world’s most famous face around Britain, Clark – who later writes the same-titled memoir which the film is based on – is struck with awe, young love and heartbreak.

My Week With Marilyn boasts an acclaimed cast that includes Kenneth Branagh, Judi Dench, Eddie Redmayne, Emma Watson and Julia Ormond, but Michelle Williams appropriately shines as the star of the film. As the story progresses, Williams cautiously owns her character, giving a performance so astounding that at times you forget that she is an actress playing another actress. You forget that she isn’t really Marilyn Monroe. With a status so iconic and surface-driven, approached by any other performer, this movie could have gone terribly wrong.

Together with this brilliant casting, the film avoids another pitfall by not addressing the obvious. My Week With Marilyn doesn’t portray the icon as the sex kitten rumored to be involved with the Kennedys, nor the doped up Hollywood star with the tragic death. By focusing on what’s on the outside may seem relatively trivial, the movie offers a mesmerizing insight into Monroe’s life as a rising personality who had just married writer Arthur Miller.

Through Clark, wide-eyed and naive, we are invited into the life of a movie star, who, underneath the make-up and costume (poignantly evident in one scene in which Monroe asks Clark to forgive her bare face), will forever be a scared young woman whose remarkable beauty outshines the tragedy of her short life.

My Week With Marilyn releases in select theaters Nov. 25.