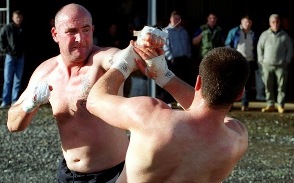 By far one of the most pulse pounding and heartfelt documentaries I have seen in a long time, Knuckle is sure to make Fight Club seem like amateur hour.

Knuckle tells an amazing story of a bare-knuckle fight war that has been raging for years between two families. It all began in 1997, when director Ian Palmer was asked to film a wedding for a then 18-year-old, Michael Quinn McDonagh. The documentary presents a wide array of footage that follows the cross-family feud between the McDonaghs and the Joyces over more than a decade up to 2009.

Both the McDonaghs, and Joyces are related. Although we are taught to believe that blood is thicker than water, it does not stop the ensuing battles filled with angry tirades and crazy antics that rage on between the families. In one of the anger-filled tirades between the two families, both the McDonagh and the Joyce families create humorous but graphic videotapes to taunt the opposing family into sending representatives to fight. Most of the antics occurred before the YouTube boom, and that site’s popularity only worsened the family’s beef’s and spread the notoriety of the fights, which are graphically documented – some ended in violent fashion, while others ended in a mutual agreement for a draw.

Palmer made sure to capture both sides of the blood-filled sparring matches, interviewing members of the McDonagh and Joyce clans, which provided for quaint humor and brutal scenes of sheer, raw, hand-to-hand combat. His most interesting subject and a large part of the story was Michael’s brother, James McDonough. He was the most feared and talented bare-knuckle brawler in the traveler camps, and though he seems to be a nice and quiet family guy, when the lights are on he turns into a violent brawler, providing some interesting character transformation.

Knuckle is a refreshing, humorous, heart-pumping documentary that gets your adrenaline going. Most people have different views on traveling street brawlers – mostly negative in nature. However, Knuckle shows that travelers are normal people; they just have different personality quirks and settle their quarrels in a non-traditional way.

This documentary is a fascinating look into a side of life that non-travelers very rarely see. The McDonaghs and the Joyces are extremely passionate and unique people whose passion has pushed them to fighting. They have a genuine hatred for each other yet maintain a strong mutual respect for how the separate clans fiercely protect their family's honor. Director Ian Palmer does a good job of capturing that in this unique film.

Knuckle opens in the following theaters on December 9:

Available Everywhere on DVD and On Demand!