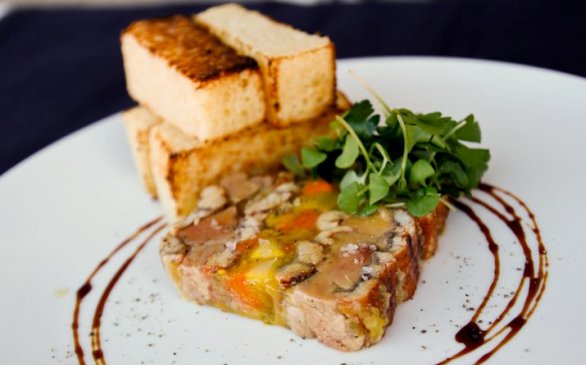 The scene is Venice Beach, known more for kush doctors and rollerblades than wine bars and fine dining, but a new restaurant called Larry’s is trying to change that. Situated at the west end of Windward Circle – the gateway to the Venice Boardwalk – Larry’s combines the laidback style of Venice with the sophisticated cuisine of neighboring Culver City. The restaurant is part of a growing trend, started by nearby Venice Beach Wines, which says beach dining doesn’t have to mean chilidogs and cheap beer.

Larry’s is an open-air restaurant, which means that lunch and dinner are served entirely al fresco. Personally, I love sharing a meal in the ocean breeze and the ability to watch the locals and tourists stroll to and from the beach. When you can see the stars from your table, the meal somehow becomes more enjoyable; it possibly even tastes better.

The restaurant is named after Larry Bell, a revered conceptual artist who lives part time in the nearby Erwin Hotel. A wall covered in chalkboard paint lists the names of over a hundred artists, some who are Bell’s contemporaries and some much younger. A black and white photograph hanging near the bar shows Bell on the beach with his peers – Ed Ruscha and Ed Moses to name a few – who all built their lives and their careers in 1960’s Venice Beach.

Chef Brendan Collins, who co-owns both Larry’s and Waterloo & City in Culver City with his partner Carolos Tomazos, likens his restaurants to the eating clubs in the UK where he grew up. In conversation he explained that the intention of both Larry’s and Waterloo & City is to serve as a meeting place, a destination where friends can meet for a pint and or for a meal.

The lunch and dinner menus look much the same. At the top of the menu is a list of pizzas, which like its sister restaurant Waterloo & City, boast some outrageously delicious toppings. There is the obligatory Margarita Pizza, but with combinations like green chorizo, egg and chipotle tomato sauce or Brussels sprouts, bacon, Parmesan and chile vinegar, the classic tomato and mozzarella fades quickly into the background. On my first trip to Larry’s a table of four lively 20-something men were inhaling a pizza smartly dubbed the Porkalicious, which appeared to have sausage, bacon, prosciutto and chorizo on top.

If you aren’t in the mood for pizza, a list of small plates and entrees provide an alternative. First come the house cured meats, made famous at Waterloo & City, which are followed by a handful of salad options, a burger and a short list of entrees. The cured meats range from the familiar slices of ham and cured beef to bizarre dishes like barbecue eel and foie gras terrine.

The salads at Larry’s are both hearty and elegant at the same time. The heirloom potato salad with Cabra Verde goat cheese, cherry tomatoes, soft herbs and fried quail egg is delicately presented with snippets of chives carefully garnishing the lightly dressed potatoes, yet the dish packs a tangy punch with flavors of goat cheese and whole grain mustard.

The burger can be ordered with either lamb or beef, and both are delicious. A steaming bowl of green curry mussels with ginger and Fresno chiles can serve as a light lunch or a perfect appetizer for two, but you will want to ask for extra grilled bread to sop up the buttery broth. Other entrees include a pasta, a halibut dish and Larry’s signature pork cheek “BLT.” With so many tasty small plates to choose from, by the time I work my way to the end of the menu, inevitably I am already full.

Perhaps the best part about Larry’s, even more than the ambience or the food, is the price. There is nothing on Larry’s menu over $15. Let me repeat that. Nothing on the menu at Larry’s in Venice Beach costs more than $15. Period.