Beth Riesgraf: Balances the Realities of Being a Working Actor in Hollywood 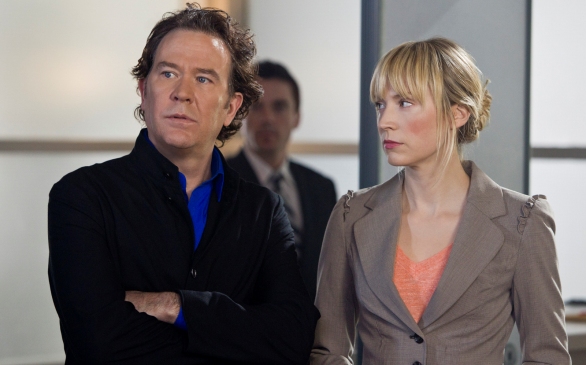 Beth Riesgraf calls a couple of minutes later than we had planned, but that’s understandable considering she has a young son to take care of and she’s a co-star working long hours on the hit TNT show “Leverage.” Her cheerful voice begins the conversation on a positive note, and after we exchange pleasantries I tell her it’s not necessary to apologize. I can’t imagine what it’s like to balance family life and work-extended days on the set of a popular TV show.

Riesgraf plays a thief on “Leverage” along with Academy Award-winning actor Timothy Hutton. As the character of Parker on the show, Riesgraf shows no fear when she has to rappel off a roof or climb a wall. It’s only fitting that in reality she shows no fear when it comes to her career and family.

When I ask her about “Leverage,” she answers with awesome enthusiasm: “It’s a massive part of my life. I love the people I work with. It’s been life changing.”

When I ask about her son her voice fills with warmth, “As hard as it can be to raise a kid and have a career, there’s no doubt in my mind that it’s worth it.”

Riesgraf didn’t grow up in Hollywood. She grew up with a big family … as the youngest of six girls.

She explains how hard work can provide amazing results in life: “It takes a village is true. I was around people who worked hard and took care of family.”

Her parents also provided a nurturing and supportive atmosphere. Early on, Riesgraf’s parents noticed her interest in movies. Laughing, she explains, “As a result I owned every single Disney movie you can imagine.”

As an adult Riesgraf moved to Los Angeles where she signed with a modeling agency and then a commercial department. But those steppingstones led to even more opportunities such as a guest spot on “My Name is Earl” and a role in the Alvin and the Chipmunks feature film.

Riesgraf was in a six-year relationship with Jason Lee who also happens to be the star of “My Name is Earl” and Alvin and the Chipmunks. They also have a young son from their past relationship. Coincidence? Riesgraf’s answer to my probing question reaffirms why I instantly took a liking to her. She calmly answers the question that even I cringed about.

“Jason Lee and I were never married … we continue to be close friends. I was careful to never get anything because of Jason.” She continues, “it can help if you know someone so that they can get you in for a meeting or to find out about projects but … I had to audition … I was told I got the role because I was funny and created a character.”

Riesgraf is very clear that she got the role because she earned it. She emphasizes that it doesn’t matter who you are, you need to be able to have talent to get many of the roles out there. Throughout her career Beth has had to deal with numerous rejections.

“I’ve gotten so close on so many projects to getting roles that would have been life-changing. The process is grueling. I thought to myself, ‘If this didn’t break me, nothing will.’” She laughs after this last statement and mentions that rejection happens to many people in various careers. “You are allowed to have a bad day at the office. Just remember to keep priorities in line, and you’ll be all right.”

Riesgraf has a special message for Campus Circle readers: “Take care of yourself. Don’t party before a midterm. Let’s use common sense. Keep your stuff together, dude.”

We both end the conversation laughing because we’ve both been there, survived, and we’re in one piece. At the end of the day, if those are rules that this accomplished Hollywood actress lives by, there’s nothing she can’t successfully do.