The Lady: Michelle Yeoh in a Touching Role 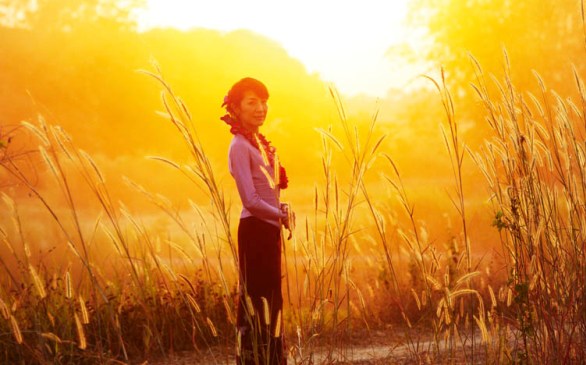 Meeting Michelle Yeoh for the first time, I couldn’t help but to see her as the actual heroine in a film. Yes, that’s how amazing she is in The Lady, taking on the role of Aung San Suu Kyi, who is one of the most influential and inspirational women of all time.

It was a giant leap for one of the godmothers of the martial arts genre to make the transition into such an important period piece. Yeoh was definitely ready to embrace her new role and hopes for more options and new characters that will enable her to give back to society. She lands directly on her feet in one of the strongest performances in a while. She is the heads-on favorite in my estimation for the Oscar for Best actress.

Looking at Yeoh you could feel her shining aura in the room. She was filled with so much excitement to talk about her new role. I couldn’t help but to wonder what got her involved in such a controversial film.

She gleams from ear to ear proclaiming, “I simply felt it was a movie that needed to be done.”

The surprising pairing of Luc Besson known for his action films (The Professional, La Femme Nikita) and Yeoh, known for her martial arts films, resulted in a beautiful film.

Yeoh comments, “Besson is truly a director capable of directing [tales about] great women, whether it be a Joan of Arc or a La Femme Nikita. Besson truly knows how to bring the greatness out of his characters. Usually it’s some sort of weapon; this time the weapon was peace.”

Besson and Yeoh were a perfect pairing and, along with Master of Disguise himself David Thewlis (Anonymous, Harry Potter, War Horse), they truly created a beautiful classic.

Yeoh did a complete transition into becoming Aung San Suu Kyi. Already fluent in four languages, she took on the incredibly difficult Burmese language. In our interview, she broke into a full Burmese monologue that wowed the room.

When asked about her learning the difficult language, she talks about how it wasn’t just learning phrases; she “wanted to learn the flow of the beautiful language.” She learned to dictate the words and the emotions by learning phrases.

When asked why it was important for her to speak Burmese just as much as English in the film, Yeoh replies, “It was a must to learn to speak the native tongue of the people of Burma and speak for the Burmese people.” She also adds that it was beneficial to have dialect coaches to help her speak Burmese along with the refugees of Burma. When asked who her coaches were, she answers that she couldn’t talk about the people that helped in the film, as they were citizens of Burma.

The film’s content is indeed controversial. Around the world, tensions still rage as the progress for the people of Burma is hotly discussed. Republic of Burma refugees, that have been exiled in Thailand, had an important role in the film, playing several of the characters.

Yeoh mentions, “The presence of current Burmese refugees gave unheralded authenticity to The Lady, as many of the characters – both evil and good – had witnessed many family atrocities in Burma.” Thewlis couldn’t help talking about the difficulties in shooting the movie, emphasizing that it’s an unusual film because though events are still occurring in Burma, it is literally shut off from the rest of the world.

He shares, “The refugee camps and the people working there had a natural touch with their presence.”

And it truly shows because though Thewlis, Yeoh and Besson are not Burmese, they developed a love for Burma and its people. They saw The Lady as a way to document and help people learn about the subject of Burma.

According to Yeoh, “It’s a film that helps with the soul and our very sensitive emotions.”

It is not a politically driven film but a beautiful love story in which Yeoh plays a very strong role and delivers a brilliant performance. The Lady is one of the best films I’ve seen in a long time.