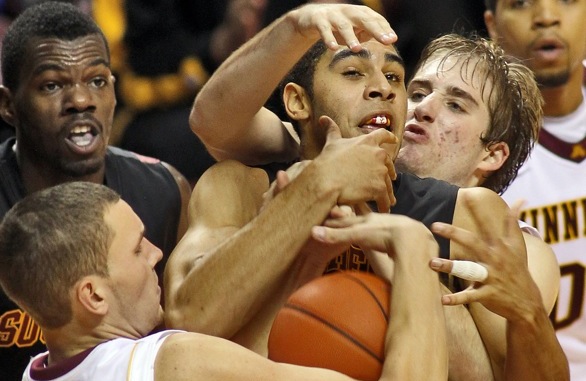 With 11,762 fans in attendance at Williams Arena in Minneapolis, the Gophers produced a 55-40 victory over the visiting Trojans on Saturday.

“We just couldn’t score,” USC head coach Kevin O’Neill tells the Los Angeles Times via phone. “If you told me we’d only give up 55 points and have only 12 turnovers, I thought we were going to win.”

“It was a good win for us, a team like Southern Cal, a team that has some things going on. It was good to get a win today no matter who we play,” Gopher head coach Tubby Smith says during the postgame press conference. “Solid effort all the way around. I thought our defense was outstanding, we rebounded the ball well, we played together.”

Before the first half ended, the Gophers went on a 12-1 run. They utilized that stretch to distance themselves from USC and, eventually, to close out the match.

For USC, guard Maurice Jones scored 14 points, had three assists and made two steals in Minnesota.

Earlier during the week, the Trojans traveled to the Inland Empire for a showdown against the UC Riverside Highlanders of the Big West Conference. USC easily came away with a 56-35 victory.

UCLA is now 2-5 overall. For Texas, J’Covan Brown played solidly well, netting a total of 22 points on nine of 15 shots made, including four three-pointers in 38 minutes.

“Brown came in with the mindset he was going to take over in the second half, and he did,” UCLA head coach Ben Howland says.

Additionally, Longhorn Myck Kabongo scored 13 points, had eight assists and collected five rebounds in 32 minutes on the court. For the game, Texas made 54.7 percent of their field goals.

UCLA did gather a win, however, and it came earlier in the week versus the Waves. In that affair, three Bruin players had double figures, and two others almost did as well. Jones had 14 points; David Wear and Norman Powell each scored 10. Also, Jones contributed six steals and four assists, while Wear had seven rebounds and two blocked shots.

“UCLA’s size and physicality was a huge difference at both ends,” Pepperdine head coach Marty Wilson admits. “That’s the one thing we talked about with our team, matching their physicality to offset their advantage in size, and we didn’t do that. They took advantage of it at both ends.”

The Trojans face New Mexico (6-2) on Saturday, Dec. 10, at the Galen Center at 4 p.m. Meanwhile, the Bruins entertain the University of Pennsylvania (4-5) at the Honda Center in Anaheim at 4 p.m.