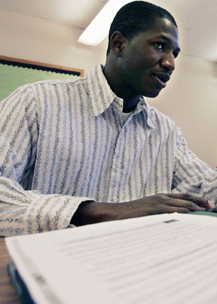 Untitled Document When David Peake started at Kent State University, he had his heart set on being a doctor.

But by his fourth year, he had decided the fit wasn’t right. So he took a deep breath, changed majors to psychology and took a fifth year of classes to graduate.

He’s not alone. Every year, tens of thousands of students nationwide slip into a fifth, sixth and even seventh year in pursuit of a bachelor’s degree – something that many never anticipated.

"If you think about the credit hours you need to get out in four years, everything has to go right," said Darrell Glenn, director of performance reporting for the Ohio Board of Regents. "There’s very little margin for error."

In Ohio, the median time to graduate is four years and one semester, according to the regents. That means half of the students graduate sooner and half take longer.

Nationwide, 57.5 percent of students graduate within six years, said Caren Scoropanos of the College Board, a not-for-profit organization of 4,700 colleges and universities.

In fact, six years – not four – is the time frame that today’s educators commonly use to clock their graduation rates.

Over the long term, about 70 percent of students who start college eventually graduate, though not necessarily at the school where they began, according to Glenn’s interpretation of census data and federal reports.

But the challenge is what lies in between. Many students get sidetracked for understandable reasons. Some must work while going to college, which can reduce the course load they take. And some get closed out of programs or courses they need, which puts them behind.

For example, students who don’t get into the University of Akron’s competitive nursing program must wait a year before trying again, said Dr. Karla Mugler, dean of University College and associate provost.

When students make a 180-degree switch in direction – from engineering to art, for instance – they almost automatically extend their timetable.

"Many of our students change their majors, which adds about one semester," said Sally Kandel, an associate vice president of research, planning and institutional effectiveness at Kent State.

"If they change colleges and majors, it’ll add two semesters – a full academic year," she said.

And some fields of study simply take longer to complete. The state median for engineering students is 4.8 years, and it’s 4.7 for health care, for example.

Also, urban colleges attract a lot of commuter students. Living at home, they might not feel the economic pressure that comes with a costly tab for college room and board, so they might schedule classes more leisurely.

And some schools have cooperative education programs in which students alternate work and classroom experience. At Cincinnati, which has the third-largest such program in the country, one-third of freshmen are in co-op programs such as engineering, business and architecture.

Still, schools that scoot their students out the door in four years tend to be more selective.

At the private College of Wooster, 68 percent of students graduate in four years, said Dean of Students Kurt Holmes.

"It’s harder to fall through the cracks here," he said. "If you need a course and it’s closed out, we can make it happen. We can deal with one student. Big schools may have 60 in the same situation."

But even big schools can have high graduation rates.

At Ohio-supported Miami University, 72 percent of students on the main campus graduate within four years. That’s the highest rate among Ohio’s public colleges.

The difference lies in the students Miami recruits and the care it takes to watch over them, said Vice Provost John Skillings.

The typical Miami student’s ACT entrance score is 27 or 28 on a scale of 36. Although both Kent State and UA have honors programs to attract good students, too, many students at Ohio’s public universities have scores in the low 20s.

Unfortunately, most parents would be startled to learn that Miami and Wooster are not the norm, and that college could be even more costly than they envisioned, college officials say.

A full-time student taking an extra year at UA or Kent State could tack on about $8,000 or more in tuition and fees. That could mean more student loans, or more checks for Mom and Dad to write.

Craig Bailey, a Medina County father with two daughters in college, doesn’t like either of those options. He has warned his daughters that they have to make "substantial" progress or the flow of money will end.

After all, the bills are high – $40,000 this year for one daughter at George Mason University in Fairfax, Va., and the other at Ohio University, said Bailey, superintendent of the Buckeye school district.

And a third child already has gone the extra-semester route, earning a bachelor’s degree in Spanish and sociology at Ohio University on his parents’ dime. Now he’s going a different direction anyway – cooking school in Denver that he’s paying for.

As for Kent State’s Peake, the decision to change majors was painful, but it has paid off. Although he had to take out more loans, he feels he’s in the right place – so much so that he’s in Kent’s master’s program.

But this time he aims to do things differently, finishing the three-year program in two years so he can get a job in school counseling. "I want to get life started," he said.