Hogwarts Is Coming to Hollywood 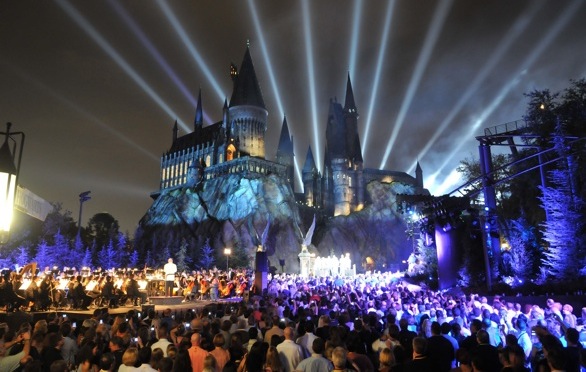 “So it’s true then … Harry Potter has come to Hogwarts,” purrs Draco Malfoy in Harry Potter and the Sorcerer’s Stone. And with that, a phenomenon was born.

Harry Potter was first published in the U.K. in 1997. Since then, it has captured the hearts and minds of millions of readers and moviegoers. Over the course of the next 13 years, six more books and eight movie adaptations would prove that Harry is here to stay.

The Harry Potter movies have made upwards of five billion dollars worldwide, and the books have now been translated into more than 60 languages, ensuring Potter fans all over the world can enjoy the series. It’s no wonder, considering the always-hungry-for-more nature of the Potter fan base. The series has influenced a generation, and many may find it hard to imagine a world without J.K. Rowling’s popular stories. The profound impact that Harry Potter has had on the world is undeniable, and it is arguably the most successful franchise of all time. So, what could possibly make it better?

In 2007, Universal Studios partnered with Warner Bros. Entertainment to answer that question with the announcement of the Wizarding World of Harry Potter, a themed area in its Orlando Islands of Adventure park. Two and a half years and more than 200 million dollars later, the park was opened to the public.

On June 18, 2010, thousands of fans were finally able to step into the world of Harry Potter and his friends. Even today, countless people continue to travel to Orlando just to see the world that Rowling created brought to life; however, some of those who can’t make it to Orlando may be in luck.

Due to the success of the Wizarding World of Harry Potter in Orlando, Universal has decided not only to expand the original park, but also to build the park to California. That’s right! Hogwarts is coming to Hollywood. Now, all of the fans on the West Coast who long to walk into the streets of Hogsmeade and visit the Hog’s Head Pub for a butterbeer can experience the magic and fun that so many have already been able to. Though it may take some time to complete the attraction, all of the dedicated fans that have stuck by Harry’s side thus far will no doubt be willing to wait.

“I am delighted that the Wizarding World of Harry Potter has been so popular with fans since the opening in Orlando last year, and I am sure that the teams at Universal and Warner Bros. will bring their expertise and attention to detail to Hollywood to make this new experience equally as exciting,” says Rowling.

Not much is known about the exact plans and layout for the Hollywood version of the attraction, but Universal and Warner Bros. will assuredly pay the same attention to detail and authenticity that they did as they created the park in Orlando. They promise that the Wizarding World of Harry Potter at Universal Studios Hollywood will be faithful to the landscape created in the films, with a Hogwarts replica serving as the centerpiece to the new portion of the park

“The announcement of our partnership with Universal to bring the Wizarding World of Harry Potter to Hollywood and expand what already exists in Orlando is probably the best holiday gift we could give to the legions of Harry Potter fans worldwide,” says Barry Meyer, Chairman & CEO, Warner Bros. “Everyone involved with these projects is committed to continuing the enchantment of J.K. Rowling’s masterful books as they were brought to life on screen in our eight films and dedicated to extending the magic of the experience for generations of fans to come.”

Harry Potter seems to be in good hands here in Hollywood, and with Rowling’s blessing, Los Angeles-based fans are sure to be eagerly anticipating the day when they can also step into Hogwarts castle and wander the famous halls that their favorite characters frequented in both the books and the movies. The completion date for the park is unclear, but it’s sure to be a blast that Potter fans can enjoy for many years.

Local News
LA County’s new coronavirus surge: How bad will it get?
609 views

Local News
L.A. is home to heavy industry— and more federal deals not to prosecute polluters than anywhere else
1,293 views
bid=||