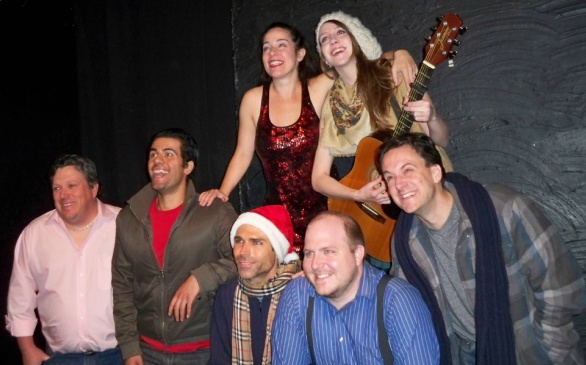 Very few preconceived notions can be had in anticipation of seeing a theater production named “Christmas 4 Bukowski.” Some presence of the yuletide spirit? Sure, it can be heard in the familiar carols performed by a young and hip singer/guitarist. Revenant poet reciting his diatribes against the realities of life? How about in the form of six brilliant thespians. But really, as the oxymoronic title asks, how does director Josh T. Ryan equate Charles Bukowski with the season of joy and celebration?

With dim lighting and jet-black walls for a background, Jessica Lynn Verdi serenades the audience with her guitar and seraphic voice as they trickle into the cozy theater of Zombie Joe’s Underground. There are no noticeable stage props, not even real costumes worn by any of the performers (except for a Santa hat and a feather boa) as spectators later learn. But who needs them? As Verdi starts to belt out Christmas lyrics six Bukowskis take stage, and one by one, they deliver the poet’s grimy, pragmatic tales from the Santa Anita tracks to an unattended funeral.

The juxtaposition of holiday anthems and Bukowski’s cynical rants is genius on Ryan’s part, and the delivery, most notably by Wasim Nomani’s funny and heartstring-tugging performance of “Death of a Father,” is affecting if not piercing. Stripped of its contrived accoutrements, especially pronounced in the holidays, what’s really left of humanity? It’s some dark and serious, kind of harrowing stuff. But what else do you expect from a drunk poet who was played by Mickey Rourke in his biopic?

This isn’t the usual holiday production – those in search for one are better off wandering into a nearby elementary school auditorium. This is Christmas for the grown-ups, the ones clued in to Santa’s possible whereabouts after the kids had left the mall with their parents (probably at home watching the 10 o’clock news; hopefully not a liquor store somewhere, but definitely not feeding reindeers). The show is a must-see for the poet’s fans or even just enthusiasts of words found in other than a blog post. A more stirring incarnation of Bukowski’s poetry would be hard to find elsewhere.