Upscale, Ethnic Fare: Is On the Menu at More Universities 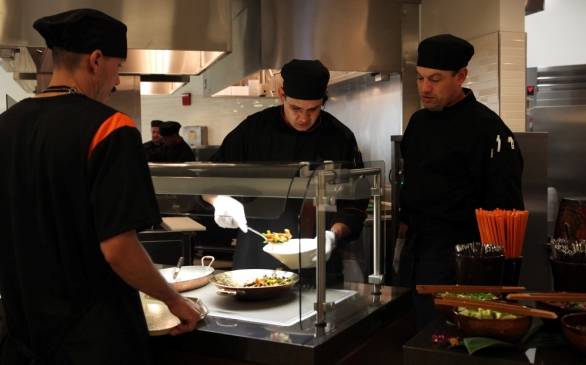 Don’t look for macaroni and cheese, hamburgers or tuna melt sandwiches at the renovated dining commons at UCLA’s Rieber Hall dormitory. Instead, a hungry student will find such dishes as spinach and seaweed roll, pork ramen with miso, Buddha’s delight and chicken tikka masala. The 600-seat facility offers exclusively Asian-style food from seven national cuisines. And in case visitors don’t realize that something different is going on, hosts welcome them in several Asian languages, and video screens broadcast cable news shows from Japan, South Korea, India and other countries.

The upscale dining hall is part of a trend by colleges nationwide to replace old-style cafeterias and “mystery meat” offerings with innovative, often ethnic fare more likely to appeal to undergraduates’ increasingly sophisticated palates and desire for healthier food. The changes reflect a broad push at many schools to improve campus housing, recreation and other amenities in order to attract students.

Critics say the trend drives up costs unnecessarily, although officials say that is not the case with the UCLA project. The changes at Rieber are also a response to demographics: About 40 percent of UCLA’s 27,000 undergraduates are Asian American or international students from Asia.

“They are all coming with dining experiences that they remember as good food and authentic food for their culture, and that’s what we want to celebrate and deliver in a very authentic way,” says Peter L. Angelis, assistant vice chancellor of housing and hospitality services.

He and other officials emphasize that the new facility is designed to appeal to students of all backgrounds. Those who do not want to eat there can use their campus meal cards for American, Mexican, Italian and other fare at nearby dining halls and cafes. Compared to previous generations, today’s college students “are much more food-savvy. They are more used to going out to eat and more used to restaurant environments and restaurant-quality of food,” says Daryl Ansel, UCLA’s residential food and beverage director.

As a result, many schools are “upgrading their ambience and the menus to get more of a restaurant feel and experience for the students,” says Nona Golledge, president of the National Association of College & University Food Services. Experiencing good food in a nice setting can influence a student’s choice of a college and continuing relationship with it, says Golledge, who is dining services director at the University of Kansas.

One of a cluster of high-rise dorms in an area of the UCLA campus known as “the hill,” the 1963 Rieber building recently underwent a major renovation. Administrators figured it was a good time to give its ground-level dining hall a new look and focus. It appears to be one of the most ambitious featuring ethnic food at any U.S. college, experts say.

Its name, “FEAST at Rieber,” is a wordplay about food from the East. Dishes from China, Japan, Thailand, Vietnam, Korea, India and Hawaii are offered, pairing two countries for each meal. UCLA chefs sampled ethnic restaurants around Southern California and asked students to be taste-testers, recommending spice levels that are authentic but not overwhelming.

With a multiethnic student body, UCLA wanted to provide home-style Asian food that might otherwise be available only off campus, Angelis says. Learning about the foods of other cultures may also have a positive social effect, helping students to be more respectful of one another, he says.

Alice Li, a Chinese-American sophomore from Monterey Park, says she enjoyed the pork baguette, the ramen and green tea ice cream. “I grew up in a really Asian town and so then being at college, I get homesick and I always want Asian food,” says Li, a women’s studies major. “So it’s really nice to have this. And they have really good food.”

Briana Jones, an African-American student and resident assistant in Rieber, predicts that the commons would be popular among students of all ethnicities.

“It might take a little getting used to, but I think a lot of people will wind up liking it,” says Jones, a third-year political science major from Sacramento.

Some student leaders have questioned whether this was a good time for the project while UC is in the midst of a budget crisis. The $5.1 million renovation included new equipment such as rice cookers and a stone oven for flatbreads and was paid for with reserves from dorm and food plan payments, not state money or tuition, Angelis says. Although it costs slightly more to prepare the Asian dishes, that will be balanced by lower-cost items, he says. He does not expect students’ room and dining bills to rise beyond the average of two percent to three percent each year. Asked whether students might appear spoiled with fancy campus amenities, Angelis points out that many live three to a room in spaces designed for two. As a result, he says, dining halls are an important communal space.

“When they look back at their college experience, a big part of the memory is the social experience of who your friends were and where did you eat,” he says.