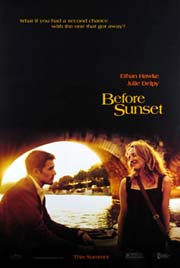 Before Sunset is the second part of a story that began nine years ago in the film Before Sunrise, when Jesse (Ethan Hawke) and Celine (Julie Delpy) met on a Eurail train in Vienna, Austria. Over the course of 14 hours, the two travelers bonded, hooked up and parted ways — neither to hear from the other again until nearly a decade later.

In the afterglow of that tryst in Vienna, promises were made and soon broken as Celine and Jesse went on with their lives — or did they? As fate would have it, the two reconnect while Jesse (now a novelist) is on the last stop of a European book tour in France. Celine, who now lives in Paris, pays him a visit as his signing concludes and the two are reunited, but not for long — Alas! Jesse has a flight back to the States in a couple of hours. The two are forced, once again, to compress everything they have wanted to say to each other for years into a couple of hours — or is there anything to discuss?

The foundation of Before Sunset is its dialogue. To that end, Celine and Jesse instantly slide into deep conversation mode, which gets the story moving along fairly quickly. Time looms large as the two stay in constant forward motion for most of the film, be it walking through Parisian streets or riding on a ferry on the Seine. A linear feel á la Dinner with Andre is maintained throughout the film because of this continual movement.

The conversational cadence of Sunset reveals a stream-of-consciousness pulse that will reel you into the story — there’s lots of improvising, which could have been a bad thing, but isn’t. Richard Linklater (Waking Life, School of Rock) returns to direct the second installment, sidestepping the cutesy When Harry Met Sally trap by letting Hawke and Delpy run with it.

Overall, those who saw Sunrise will get closure with Sunset, and even those new to Linklater’s two-part saga will enjoy this film in its own right.