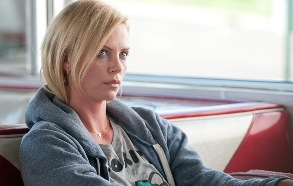 To some extent, we are all just older versions of our younger selves. We don’t grow up that much, not really. A timely and very fitting example of this is the phenomenon known as Twilight, which has encouraged a generation of Susie Homemakers to replace their spatulas and vacuums with books and fang marks. More than ever before, pop culture lowers our inhibitions and drugs us with the sweet sounds of reality television so that the line between fiction and the real world is blurred to near obscurity.

Writer Diablo Cody depicts with spot-on clarity this kind of people who parade around still reliving their high school or college glory days. Mavis Gary (Charlize Theron) is one such person, a 30-something-year-old writer of young adult fiction. An avid follower of the Kardashians and other E! stars, Mavis is somewhat in ruins. She has major writer’s block, her apartment is a mess and she seems to only have one friend.

When she receives an e-mail from her high school boyfriend (Patrick Wilson) announcing the birth of his child, Mavis is convinced it’s a sign to leave the big city and return to her small hometown to save her ex from his ‘miserable’ life of marriage and fatherhood. Neglecting her dog and the manuscript due in days, Mavis sets out to woo the boyfriend that got away.

One unforeseen obstacle in her quest to conquer is Matt (Patton Oswalt) who went to high school with Mavis and who was beaten to near death by high school jocks. The unlikeliest of pairs, Matt and Mavis bond over alcohol and drugs, but both harbor the same resentment for their past (or maybe it’s their inability to get over their past?).

Mavis doesn’t get what she wants in a spectacular fashion, and what ultimately culminates in disaster is Cody’s finger-pointing, full belly laughing cynicism directed at the people who left their prime in their teens. Theron makes a very despicable character, and Oswalt, who has had years of comedic practice on such shows as “Reno 911!” and “United States of Tara” (created by Cody), is in top form, delivering the best one-liners of the film.

Director Jason Reitman should be given credit where it’s due; he sets the tone for the entire film, and we only laugh when he instructs us to. However, it is Cody who is the shining star here, who has developed and, dare I say it, grown up quite a bit, dropping the happy ending and progressing past the young adulthood she sadistically tears to shreds.