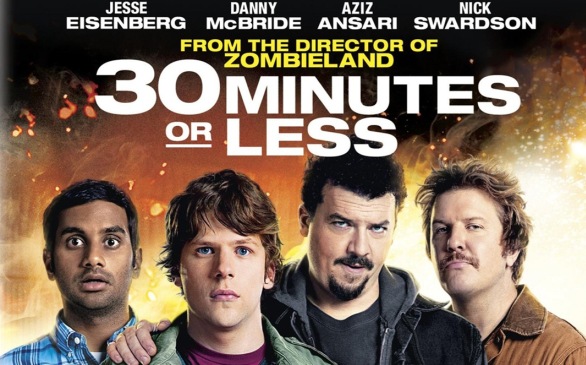 The Majors:
After killing a mother and child in a car crash, a young woman (Brit Marling) starts a relationship with the grieving widower as the world projects its hopes and fears onto the mirror Earth that has appeared in the sky in Another Earth.

A stellar ensemble cast, including Helen Mirren, Tom Wilkinson and Jessica Chastain, stars in the original espionage thriller The Debt. Taking place in two parallel time periods, the story follows the secret mission to hunt down a Nazi war criminal.

Anne Hathaway and Jim Sturgess star in the adaptation of the best-selling romantic novel One Day, following the 20-year romance between an idealistic working class girl and a slick rich guy.

Emma Roberts and Freddie Highmore find young love in New York in The Art of Getting By.

Neil Patrick Harris and Sofia Vergara voice ’80s cartoon favorites transported to Central Park on the run from an evil wizard in The Smurfs.

The Idiotbox:
Carol (Matt Damon) loses it on Liz when his plane is stuck on the tarmac for hours. A gas leak in the building causes everyone to hallucinate. It’s business as usual in the world of sketch comedy shows in 30 Rock: Season 5. It remains one of TV’s sharpest comedies.

Based on his critically acclaimed film of the same name, Adam Rifkin’s Look: Season 1 is a drama shot entirely from security camera footage, which paints a cold and creepy picture of vanishing privacy in a post-9/11 security state.

Available online through the Warner Archives: The Ricky Gervais Show: Season 2 brings the comedian’s podcast to animated life as Gervais and his two friends wax philosophic about life, kidney stones and film plots.

The director of Zombieland re-teams with Jesse Eisenberg for 30 Minutes or Less. Danny McBride and Nick Swardson are two aspiring criminals who kidnap a pizza delivery guy and force him to rob a bank. With the help of his estranged best friend (Aziz Ansari), Eisenberg tries to get out of it alive.

Paul Rudd stars as a guileless dolt who invades his sisters’ lives after his girlfriend kicks him out in Our Idiot Brother. Elizabeth Banks, Zooey Deschanel and Emily Mortimer try to contend with the havoc he wreaks.

Ecuador: Rainforest vs. Globalization follows the courageous mission of Ecuador’s President to take on the powerful IMF and protect the nation’s indigenous people and resources, while developing his country’s future.

Under the Radar:
A dark trailer-trash comedy, Mangus!, follows one teenager’s quest to play Jesus in an annual high school production.

Foreign Fare:
Hong Kong action maestro Tung-Shing “Derek” Yee follows up Double Tap with Triple Tap, an action-packed battle of wits about a marksman who foils a bank robbery but soon comes under suspicion as masterminding the whole thing.