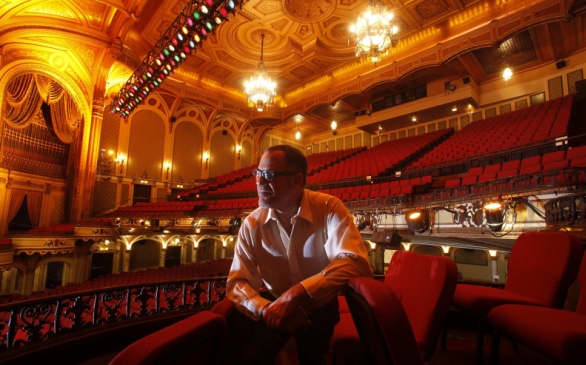 Steve Needleman is the owner of the Orpheum, being used in J. Edgar and The Artist
(Credit: Mark Boster/Los Angeles Times/MCT)

The opulent picture palaces and vaudeville halls of downtown Los Angeles may be monuments to a bygone era, but they are still keeping their ties to Hollywood. Theaters in the historic Broadway district, including the Orpheum, the Palace Theatre and the Los Angeles Theatre, are featured in several current and upcoming movies, including Walt Disney Pictures’ The Muppets, Warner Bros.’ J. Edgar and The Dark Knight Rises, and the Weinstein Co.’s The Artist, the silent, black and white, period romance. The elegant structures are popular among location managers and set designers because of their rich and varied architecture, which ranges from Art Deco to French Baroque and Spanish Gothic – sometimes all in the same venue.

Another selling point: because they are no longer used to show first run-movies, the buildings are readily available for dressing up as movie sets. “They are an incredibly valuable resource for filming in Los Angeles,” says John Panzarella, location manager for In Time, the recently released sci-fi thriller starring Justin Timberlake and Amanda Seyfried.

Panzarella booked the grand lobby of the Los Angeles Theatre to depict a European casino. In Time is among more than a dozen movies that have filmed at the Broadway district landmark, which was designed by architect Charles Lee and opened in 1931 for the gala screening of Charlie Chaplin’s City Lights.

The building, now listed with the National Register of Historic Places, was the last and most extravagant of the downtown movie palaces built between 1910 and 1931. Together, they formed the core of the city’s entertainment district, which also hosted live performances by artists as diverse as Judy Garland and Miles Davis. Later, they hosted puppets. Producers of The Muppets also shot a scene in the same lobby, where Kermit the Frog makes his final speech on the grand staircase.

Most of the original 19 theaters have long since closed. A handful – including the Million Dollar Theater and the Palace – remain open for special events, screenings and concerts. (Loew’s State Theatre, at 7th Street and Broadway, is a church.) Several rent their auditoriums, lobbies and ballrooms to film crews, which may be the reason they’re still around.

“Their use as film locations is one of the main reasons they are still here and intact,” says Hillsman Wright, co-founder of the Los Angeles Historic Theatre Foundation, which has been working to preserve the storied real estate. “They are very powerful buildings that were designed to take you away from the troubled world, particularly during the Depression era. They were built to inspire and they still have that quality.”

Richard Middleton, executive producer of The Artist, says the old movie houses are an asset to a city that has suffered from runaway production. The Oscar contender is set in the 1920s and tells the story of a silent movie star struggling to adapt to the advent of the talkies. It was filmed on location in Los Angeles, at the Los Angeles Theatre and the Orpheum.

“It’s pretty hard to find period-correct theaters that can give you the look from that time,” Middleton says. “Luckily for us, these theaters are in good condition and have maintained their architecturally integrity.”

In addition to The Artist, several other movies have filmed at the Orpheum, including Funny People, The Curious Case of Benjamin Button and Dreamgirls. The theater has also been a location for commercials, music videos, live concerts and even performances of “American Idol.”

Owner Steve Needleman has invested more than $4 million in improvements to renovate the theater, which he heavily markets as a film location. He says that up to 60 percent of his business comes from film and TV productions, which pay as much as $10,000 a day to shoot there.

“We’re offering a production value to them that you just can’t get in other places,” Needleman says. “It’s getting back to that old- time look of Los Angeles.”