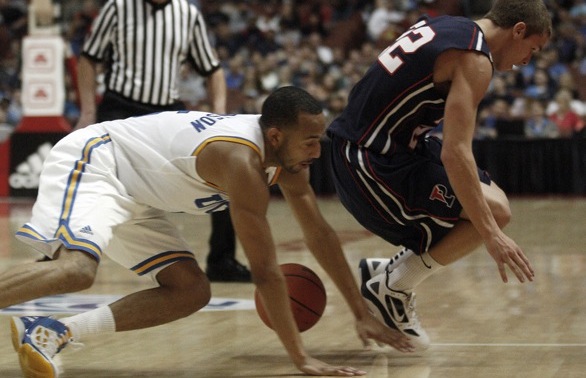 Jerime Anderson, left, of UCLA battles for the ball with Steve Rennard of Pennsylvania.
(Credit: Gary Friedman/Los Angeles Times/MCT)
UCLA
The UCLA Bruins men’s basketball squad topped the University of Pennsylvania Quakers by a score of 77-73 on Saturday night at the Honda Center in Anaheim. With the victory, the Bruins improved to 3-5 overall, while the Quakers dropped to 5-6 for the year. More than 6,000 fans attended the nonconference affair, which had both programs facing each other for the first time since 1987.
Although UCLA held a comfortable lead at times during the game, Bruin head coach Ben Howland acknowledges how close the game became.
“It was important for us to win a close game,” Howland says. “Our guys made key plays down the stretch. Jerime Anderson, in the first half, made some big shots to get us going.”
For UCLA, it was also an important win because of the recent conflicts surrounding Reeves Nelson, who was kicked off the team due to poor behavior. Consequently, earning this victory just two days after the announcement was crucial for the Bruins in order to begin their next chapter as a team.
“After much thought and deliberation, I have made the decision to dismiss Reeves Nelson from the UCLA men’sb team effective immediately,” Howland said in a prepared statement. “This decision is not one that I take lightly, but it is in the best interest of both the program and the student-athlete.”
For better or for worse, Nelson’s scoring will be missed. Last year, he was a first team All-Pac-10 selection after he led the Bruins in scoring and rebounding with averages of 13.9 points and 9.1 rebounds per game. This season, however, he saw a significant drop in production. Nelson had started in only one game this season and played in six of the seven contests, while averaging 5.7 points and 4.5 rebounds per game.
I wonder if Nelson was missed in the team’s first game after being dismissed, but the four-point victory for the Bruins did not really show that. They played well, led by Lazeric Jones’ 21 points, four assists, three rebounds and two steals in a team-high 36 minutes of playing time. Jones converted seven of 10 shots, including three treys.
Additionally, three other Bruins saw point production reach double figures. David Wear recorded a double-double of 11 points and 12 rebounds, while Joshua Smith had 12 points and six boards and Travis Wear pitched in 12 points and three rebounds.
At halftime, the Bruins led by four points (39-35). The hosts’ biggest lead of the contest came in the second half, when they held an edge of 14 points. One of the major differences in the game arrived with regards to points in the paint, which UCLA dominated 34-16. They also outscored the Quakers in points off turnovers, 15-8.
The Bruins led by 13 with 5:34 remaining before getting outscored 18-9 to end the affair, and Penn’s Tyler Bernardini had a lot to do with that. Bernardini totaled a game-high 29 points with seven rebounds and three assists. Rob Belcore was the other Penn player in double figures, registering 13 points with his three steals.
Despite giving up the lead for a bit, Howland felt well about beating Penn.
“It was a good feeling to win,” he says. “Penn is a very well-coached team. It was a good win for us, and a step in the right direction. Our next game against Eastern Washington won’t be any easier.”
The Bruins entertain the Eastern Washington Eagles on Wednesday, Dec. 14, at the Los Angeles Sports Arena at 7:30 p.m. before hosting the UC Davis Aggies at the Honda Center on Saturday, Dec. 17, at noon. Both games are nonconference meetings. For more information, visit uclabruins.com.

USC
For USC, well, they had a different outcome. USC suffered a 44-41 loss to the New Mexico Lobos. With the defeat, the Trojans moved 4-6 overall, while the Lobos improved to 7-2. Maurice Jones led USC with 19 points and five rebounds. Two Lobos scored in double figures, led by Drew Gordon’s double -double of 13 points and 13 rebounds. Tony Snell contributed 10 points.
New Mexico led by eight points at halftime (23-15), but the Trojans mounted a comeback bid although it did fall just short before the 4,000 fans present.
The Trojans return to the court on Dec. 17, hosting the Georgia Bulldogs at 7 p.m. For more information, visit usctrojans.com.