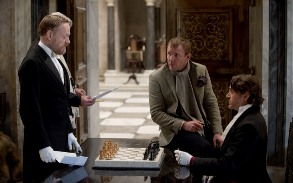 The signature action scene in the soon-to-be-released Sherlock Holmes: A Game of Shadows unfolds in a fusillade in a forest, as high-speed cameras zooming at 70 mph capture ammunition ripping through trees and flesh in real time. It’s the type of mayhem, initially so intense that the film faced an R rating, that you would find only in a movie directed by Guy Ritchie.

Until two years ago, Ritchie was known only to a select cinema buff crowd for his stylish, low-budget British gangster movies – Snatch, Lock, Stock and Two Smoking Barrels, Revolver and RockNRolla. He burst into the mainstream, and into Hollywood’s loftiest ranks, by directing Robert Downey Jr. and Jude Law in the 2009 megahit Sherlock Holmes, which grossed more than $524 million worldwide.

Though the first Sherlock was a blockbuster, in many ways it was Ritchie’s most constrained production, short on some of his distinctive flourishes. The key set piece in the film, for instance, transpired on London Bridge, a sequence heavy on computer effects but light on novelty – the sort of staging you might come across in any number of studio action movies. But as the new detective movie should prove, Ritchie has in many ways reverted to his earliest form, injecting the follow-up with more of his signature cinematic touches.

Audiences appear even more intrigued with the sequel than with the original, as pre-release surveys suggest A Game of Shadows could be December’s all-conquering hit, with stronger early interest than for Mission: Impossible – Ghost Protocol. And because Ritchie’s film won’t be competing against a juggernaut such as Avatar, as was the case with Sherlock Holmes: A Game of Shadows could play far into the new year.

“I much prefer it to the first movie,” Ritchie says a day after jetting through Southern California’s windstorms in a terrifying flight that left the 43-year-old director (traveling with model Jacqui Ainsley and their newborn son) so discomfited that he was gasping for breath. “I just enjoyed the experience more.”

When Warner Bros. hired Ritchie to pump life into Arthur Conan Doyle’s 19th century literary creation, he was an unusual choice. His 2008 film RockNRolla was only a minor respite from his critical and commercial disappointments Revolver (2005) and Swept Away (2002), the latter starring his then-wife, Madonna. And Sherlock Holmes would cost about 10 times that of his most expensive production, the $18-million RockNRolla.

Producer Lionel Wigram, who worked with director David Yates, another unconventional choice, on the studio’s Harry Potter franchise, nevertheless thought it was a marriage made in moviemaking heaven.

“He’d obviously had a period where a couple of his movies had not been well received,” Wigram says. “But the way to make Sherlock Holmes feel fresh and innovative was the Guy Ritchie version.”

“That’s what defines his movies – it’s all through the filter of Guy’s sensibility.”

The new movie, budgeted at $125 million, is set in 1891 London, and international unrest is mounting, due largely to mysterious bombings. Holmes is pursuing the “Napoleon of crime,” an academic named Professor Moriarty (Jared Harris) who may be trying to foment, and then make a fortune from, a world war.

Holmes, who calls it “the single-most important case of my career – perhaps of all time,” resorts to all manner of disguises in chasing the professor, who intends to corner the market on artillery and bandages. Holmes must first persuade Watson, who is about to wed Mary Morstan (Kelly Reilly), to put crime fighting ahead of marriage. With his assistant finally on board, the two collaborate with the gypsy Sim (Noomi Rapace), whose brother may be working with Moriarty, to stop the professor’s plot.

Ritchie says making the first film was as personally satisfying as it was professionally, largely thanks to the collaboration with Downey and his producing partner, wife Susan Downey.

“They were great mates,” Ritchie says. “I was going through a divorce, and there was a lot going on [in making the movie] that made me feel comfortable.”

If the director, who also has made award-winning commercials for BMW and Nike, was comfortable on the set of the first film, he was luxuriating on the second, his ease revealed in how he shot the forest scene. (It was shot in Bourne Wood, outside Surrey, England; most of the film was staged in the United Kingdom).

“I made up my mind to make something out of nothing,” Ritchie says. “In the script [credited to Michele and Kieran Mulroney, but revised and improvised by Ritchie, the producers, Downey and Law], it just said, ‘They are running through the woods.’ But often the most creative stuff comes from nothing.”

Shooting in the woods was originally scheduled for just two days of filming, but Ritchie asked for an additional three days of photography there.

“And then I armed myself with as many toys as I could,” he says. “I need gizmos – I like the technical side of filmmaking.”

In his arsenal was a track system designed for sports that can travel as fast as 70 mph, and a digital camera called “The Phantom” whose frame rate could be cranked up to 5,000 frames per second – the normal rate is 24 – so as to freeze high-speed objects such as bullets. (The faster the camera films, the slower the images play.)

“The bullets you see in the air are real bullets – that’s the speed at which they fly,” the director says.

Popcorn movies such as Sherlock Holmes don’t usually try to present philosophical arguments. Though Ritchie, who has been working on a documentary about spirituality, believes there’s one inside A Game of Shadows, principally in how Moriarty is banking not on the likelihood of war but on its inevitability.

“Moriarty is relying on the fact that inside the human consciousness is an insatiable desire for conflict,” Ritchie says. “I’m not sure I have seen that in a film like this before.” Having recently formed a partnership with Wigram, Ritchie says he’s unsure what he’ll do next, but it’s safe to assume a third Sherlock Holmes movie will be atop the list. He recently published the graphic novel Gamekeeper, which could easily translate into a feature.

He appreciates that he has a new lease on life.

Sherlock Holmes: A Game of Shadows releases in theaters Dec. 16.