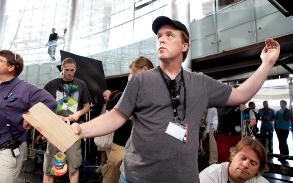 Brad Bird has made some of the more brilliant and thrilling animated movies of the past two decades, if not of all time. He pushed the boundaries of feature animation with The Iron Giant, and won best-animated-feature Oscars with The Incredibles and Ratatouille, merging commercial and critical success. But Bird scorns complacency, quoting Steve Jobs’ 2005 commencement address at Stanford University: “Stay hungry. Stay foolish.”

Surprisingly, Bird says dangling one of the world’s top stars from the world’s tallest building isn’t so different from directing computer-generated cartoon characters.

While live-action films are using more of the techniques of digital animation, he knew that going on location and “actually, physically” hanging Cruise a quarter-mile above the city would give viewers a visceral thrill that could be captured no other way.

The Mission: Impossible franchise offered Bird considerable latitude. Cruise, who also produces the films, has hired a different director for each of its four installments. In this outing, Cruise’s team includes returning co-star Simon Pegg and newcomers Jeremy Renner and Paula Patton playing colleagues unknown to each other and cut off from official support. Without a fixed blueprint to follow, Bird says, he was free to chart his own path, giving his chapter a more playful feel and a hero who is extraordinarily skilled yet still human.

“I liked the fact that each one had different vibes to them. Tom wanted each film to have the flavor of its director, and that’s one of the things that attracted me.”

Some of Bird’s favorite films are action movies laced with humor “and not T-shirt lines that are meant to be quoted later. Not wink-wink-nudge-nudge humor, either, but stuff that comes out of character.”

Bird loves Raiders of the Lost Ark, he says, “because it has this wonderful balance between the energy and pace and peril of the action sequences and the way you’re continually engaged by the character of Indiana Jones. You like him, and there’s a wit to the way he’s presented. I could say the same for the first Die Hard movie. There’s a lot of humor in it, but it never comes at the expense of the action.”

One such moment comes when Cruise’s superspy, Ethan Hunt, is informed he’ll have to climb across the sheer glass face of the Burj tower aided only by some glue gloves. Time is running out, but there’s a cut to Cruise’s thunderstruck expression and a beat of hesitation before he tackles the stunt.

“I really hate it when action stars think they look cool by blithely facing danger and acting mildly bored,” Bird says. “Roger Moore’s James Bond always looked like he was between saunas. Sean Connery was clearly a tough guy, but he’d get in these action scenes and you’d see his life flash before his eyes. That made you invest in the character because he became real.”

Getting out of one’s comfort zone and taking chances is something of a mantra for the 54-year-old Bird. Born in Montana and raised in Oregon, he was an animation prodigy who made his first film short, a retelling of the tortoise and the hare, at age 11. It took him two years to complete. In 1977, he sent a copy to Walt Disney Studios.

Impressed by his work, they invited him, at 14, to enroll in a mentoring program. He trained as an apprentice under legendary Disney animators and helped animate the studio’s 1981 feature The Fox and the Hounds.

Disappointed with the creatively timid Disney of the early 1980s, Bird left, and quickly established a reputation as a top writer for Steven Spielberg’s fantasy anthology TV series “Amazing Stories.” Next came a stint on “The Tracey Ullman Show” and eight seasons with “The Simpsons.”

Bird’s film directorial debut, 1999’s The Iron Giant was a touching adaptation of British poet Ted Hughes’ story of loyalty between a boy and a robot. A box-office disappointment, it made a strong impression on those who saw it. That included Steve Jobs, who hired Bird for Pixar in 2000 to shake things up and make sure the company remained innovative.

Bird helped guide it to an unprecedented run of hits. The first film he developed for Pixar (and wrote and directed) was the smash superhero spoof The Incredibles, whose boisterous action scenes demonstrated the visual storytelling chops that earned him the Mission: Impossible assignment.

The Mission: Impossible stunt sequences presented Bird with challenges like nothing he’d ever faced.

“The sequence on the Burj was so logistically complex to pull off. Not just to be up there with our actor but also filming it in IMAX,” whose special 70mm cameras are huge, heavy and noisy. “We definitely made it about as hard as we could make it and still manage to survive and tell the tale.”

“I like being able to throw something at an actor right before the camera goes on and see something happen. Then you have something magic that happened that one time only. There’s a scene in the film between Jeremy Renner and Simon Pegg that was done all in one take where they threw each other curves and responded to the curves, and it was this incredibly alive moment. That’s the kind of thing you can’t have happen the same way in animation.”

He holds both in equal esteem, but Bird says that in the movie industry, directing live action is “taken more seriously. For a long time, animation has been seen as the kids’ table.” He notes that no maker of animated films has ever been nominated for best director.

“The animated film Oscar is wonderful, but it tends to separate animation from the rest of movies. I was honored to be nominated for best original screenplay a couple of times because I was competing against all films, not just with animated films. I like being in the larger pond.”

While his new film will certainly open the door to a live-action directing career for Bird, he says he plans to remain active in Pixar as part of the creative oversight committee.

“I’m not there as much, obviously, but I’m still keeping my hand in. It’s an amazing company, a mutually supportive team of really talented people, and I love those guys.”