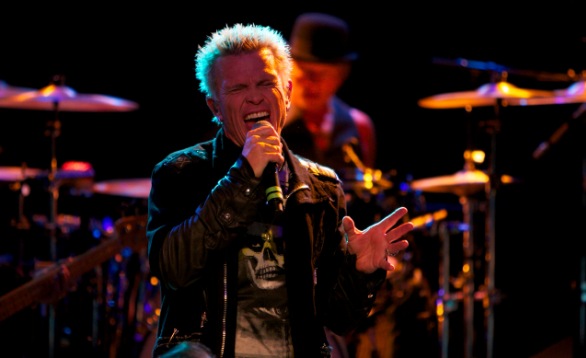 It’s that time of year again … when the weather gets cold, and the Sunset Strip gets hot. For the fifth year, the Roxy Theatre is playing host to a Camp Freddy residency. Friday nights in December will belong to rock ’n’ roll as this all-star band takes the stage and shows everyone what music is truly made of.
The band consists of legends and soon-to-be legends: vocalist Donovan Leitch for part of the night, then you have Matt Sorum from Guns N’ Roses on drums, over on one guitar is Billy Morrison from the Cult and then on another is Dave Navarro of Jane’s Addiction. Then the real fun kicks in…
Each night, a slew of rock stars join the already talent-laden group on stage at the Roxy. The opening night had the craziest line up to date: Sebastian Bach from Skid Row, followed by Mark McGrath from Sugar Ray singing alongside Skinhead Rob of the Transplants doing some Beastie Boys. But the biggest thing about the opening night was Billy Idol coming on stage and doing the last three songs of the night with his longtime guitarist Steve Stevens at his side.
Now, if all of this went down on the first night, just imagine where it’s going to go from there. And that’s really the beauty of the Roxy and Camp Freddy; both embody what’s right about music and the scene. They both take the pure aspect of playing fun songs with your friends and bring everyone together for a great time. The Roxy has always been a place for the best to come show the world what they have, and now this seems like their little Christmas gift back to the people who have made it the place it is with a show that rivals anything on the strip.