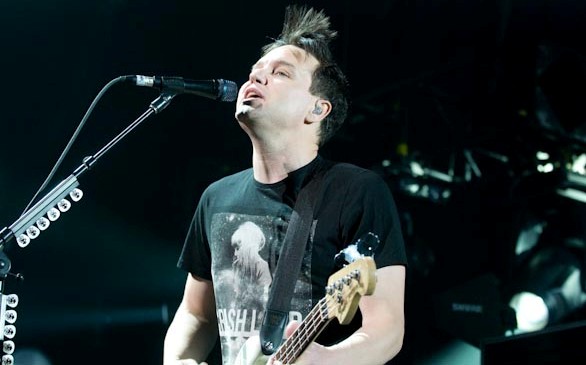 For the last 22 years, the KROQ Almost Acoustic Christmas has been the beginning of the Christmas season for the station’s listeners in Southern California. This year’s Night One lineup was a thrill to see, with just one glitch: Incubus regrettably had to pull out of the show a few days before due to illness in the band.

While I have to admit they were one of my top picks for the night and I would have loved to see them again, I was still happy to begin the Christmas season at Gibson Amphitheatre.

The boys of New Found Glory stared out the night with vocalist Jordan Pundik decked out as a punk rock Santa and were a great opening for the festival. Young the Giant continued the night with “Cough Syrup” and “My Body,” which both got great responses from the crowd who sang along and finally got up on its feet.

Chevelle took to the stage as the third band, and the screams from the pit challenged the soundsystem for a moment. The fans of the Loeffler brothers and the rest of the band sang along from the beginning.

Bush, who was the start of the 2000s flashback of the night, came out and put on a great show. People of every age jumped to their feet and yelled and danced. Parents and kids, side by side at a rock show, is a great way to bring in the holiday season. Gavin Rossdale took time between songs for some personal shout-outs to the KROQ team to thank them and of course the fans for the support throughout the years.

Sublime with Rome, while an unconventional replacement for Incubus, came out and filled in the other band’s shoes. Drummer Bud Gaugh announced that he would be taking a break to be with his family since, they’re expecting a baby. The set unexpectedly ended up being a goodbye for the band members.

Social Distortion, whose frontman was described to me as a “punk rock gangster” brought an energetic and rock-filled set. I agree whole-heartedly with the description of Mike Ness. He earned it. 311’s set was full of hipster-esque rock and light-hearted banter with the audience.

“Someone over there is lacking the Christmas cheer!” 311 frontman Nick Hexum joked when someone wasn’t dancing quite enough. The other photographers and I found ourselves dancing along with their set, and that doesn't happen at every show.

Blink-182’s own brand of “bad punk rock” was the best way to end the night. The guys, who have been playing off and on for years, still have fun on stage together. Tom DeLonge, Travis Barker and Mark Hoppus told jokes and performed a great set. They were the highlight of my night.