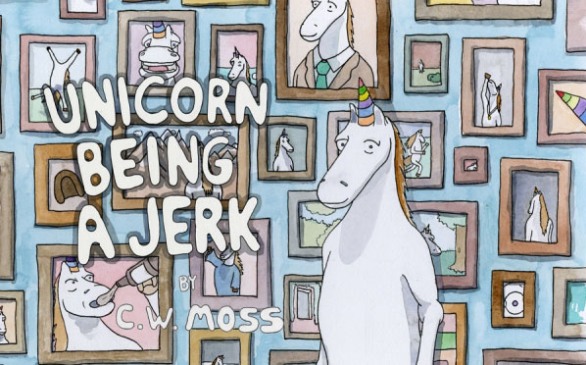 The History of the World According to Facebook
By Wylie Overstreet
(It Books)
Yes, this book is a complete parody featuring bogus Facebook entries that begin appropriately enough with “The Universe” posting pictures from its “birthday party,” photos of stars being born and other cosmic events that get a “like” from Carl Sagan. The Dawn of Man chapter has lots of dialog from Adam, Eve, God and an assortment of other religious biggies while a couple thousand years later in the Industrial Revolution chapter Alexander Graham Bell utters the first “Can you hear me now?”

Most of the parody is nowhere near hilarity, but it is spot-on in its mimicking of inane Facebook entries even if some of them are mean-spirited (Helen Keller’s gibberish) or in just plain bad taste, like everything posted by or because of Hitler (“Europe changed its profile picture.”) The last chapter covers pop culture from the most recent decades, and this will probably be the book’s most enjoyed segment; Overstreet doesn’t get too obscure with his references, but obviously the reader needs to have a basic knowledge of history in order to get many of his gags.
Grade: B

Travels: Collected Writings 1950-1993
By Paul Bowles
(ECCO)
Bowles, who died in 1999, was a well-traveled author who wrote the New York Times bestseller The Sheltering Sky; a novel based on his travels throughout the Sahara. This book, however, is non-fiction, collecting nearly 40 of his travel writing essays and inspired by stints in Morocco, Kenya, Paris, Ceylon, Thailand and other places.

You might think the older essays here, like the 1956 piece View From Tangier, would be hopelessly dated. To the contrary, Bowles relates details that seem to jump from today’s headlines; a Moslem woman caught drinking alcohol in Tangier will suffer the penalty of having her hair and eyebrows shaved off. This is not typical travel writing – go here and see this – Bowles marvels at natural wonders throughout, but it is the people he interacts with and the situations they get into (There’s a chapter on smoking the African cannabis known as kif.) that make the book an exceptional read.
Grade: A

Unicorn Being a Jerk
By C.W. Moss
(It Books)
You may have seen Moss’ naughty Mr. Unicorn acting up in illustrations on the Internet; Unicorn Being a Jerk gathers 55 full color, one-panel LOL comics with the one-horned menace doing such things as peeing in the pool, photocopying his butt, stealing all the change from a fountain and getting into a fight at his kid’s Little League game.

It’s important to remember that unicorns, let alone Mr. Unicorn, are mythical creatures because some of the illustrations might push the buttons of more sensitive viewers. Some may not see the humor in panels showing Unicorn beating his wife, clubbing baby seals or indicating that he’s a pedophile. Generally though, Unicorn Being a Jerk is a real hoot that’ll leave the viewer looking forward to future volumes.
Grade: B

Vintage 80s: London Street Photography
By Johnny Stiletto
(Frances Lincoln)
Renowned photographer Stiletto has a collection of his work on display in the vaunted Tate Gallery in London; Vintage 80s collects 160 black and white street photos taken at a time when, per Stiletto, London was “the style, musical, political and fashion capital of the world.” Some of the photos are quite puzzling until you read the caption; a shot of a woman bent over on the sidewalk and apparently peering behind her is identified as “Woman farting, West End.”

The most evocative of photos though are those featuring faces, as Stiletto demonstrates a talent for capturing quite an assortment of characters, most of whom are just everyday people although here and there will be a candid of someone like musician Phil Collins’ mother. Hairdos, shoes and headlines get their share of attention too and by the time you’re through studying the pages you can almost feel the London fog.
Grade: A