Lee Lucas: Singer-Songwriter and Creator of the Looksy 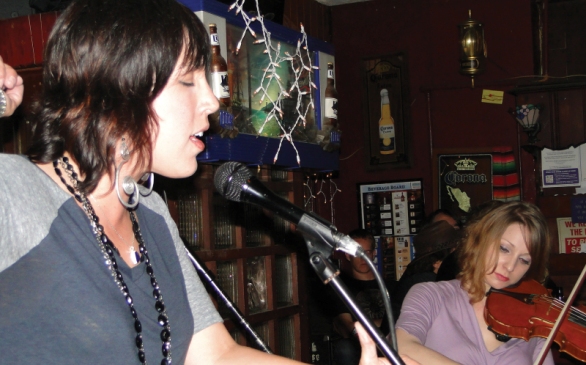 Lee Lucas, singer-songwriter and entrepreneur agrees to meet before a recent gig at the Cinema Bar in Culver City. I notice three bracelets stacked on her wrist, and realize these must be from her bracelet line, the Looksy.

We dive right in talking about the Looksy, creativity, the music industry and life as the frontwoman for a band. Lee’s band, NeonWest just won “Best in Country” on mp3.com and has been featured on “Entertainment Tonight.” Like many others in Los Angeles, Lee balances many creative projects, the Looksy Bracelet line, NeonWest and songwriting, producing a cartoon and working a day job.

At one of her gigs one night, as she was rushing to get up on stage, she realized she hadn’t checked her lipstick. Looking around, she realized there was no mirror to be found and no time to go find one. It was then that it hit her: Wouldn’t it be great to have a mirror that you wear, a trendy bracelet that also doubled as a touch-up mirror? The Looksy was born.

The Looksy is a leather bracelet/wristband with a mirror on it, perfect for a quick makeup check with a flip of the wrist. It currently comes in two styles, “Rockstar” and “Popstar” and four colors: black, white, dark brown and purple.

When asked if she ever designed anything, she replies, “I’m creative in lots of ways. I invent stuff all the time. I always have ideas. The Looksy, songs, lyrics, movie ideas – things like that. I don’t normally create things with my hands. I’m not a real ‘crafty’ person. But I did love the jewelry and leather classes in high school, which was probably my basis for using leather as the material for the first Looksy designs.”

Lee further explains the early days of the Looksy: “I started with ribbon, glue and mirrors from Michael’s craft store. I have kept a lot my prototypes; it’s hilarious and inspiring when I look back on what they were when I first started creating the Looksy. They’ve really progressed, and now I am really proud of the Looksy.”

When asked about the music business, she replies, “My perception is that the record business has completely changed, and is still in flux. I also think there are two very different sides to it, the corporate music side and the indie side. The Internet, iTunes and the deregulation of radio completely changed the game for everyone. Now a band doesn’t need a record label, which is great. However, there is so much music out there, since anyone can do it online. So you really have to stand out, work hard, get lucky. But at least musicians have the ability to be 100 percent in charge of their own careers. That’s the cool part about it.”

Her bracelet line is featured at Bohemian Exchange Boutique (1358 Abbot Kinney, Venice), Rosenthal Estates Winery in Malibu and other locations. Several celebrities can be seen wearing the Looksy, such as singer Vicci Martinez (from NBC’s hit show, “The Voice”) and actress/model Sarah Hester.

Lee also participates in jewelry/art shows, like the Holiday Boutique event, at Walgrove Elementary School, (1630 Walgrove Ave., Venice) on Wednesday Dec. 14 from 8 a.m. to 3 p.m. A portion of the proceeds will go to the school.

While working as a waitress, Lucas has sold many Looksys to customers, servers, even busboys!

“It’s perfect for servers who are always grabbing food on the run. The last thing you want to do is go up to a table with a huge smile and totally embarrass yourself. It’s saved me lots of times!”

The Looksy will also be featured at the Venice Art Crawl in December, a monthly art walk that happens every third Thursday of the month. Lee will be showing off her Looksy line downstairs at Hotel Erwin (1697 Pacific Ave.), from 6 p.m. until 10 p.m. on Thursday, Dec. 15.