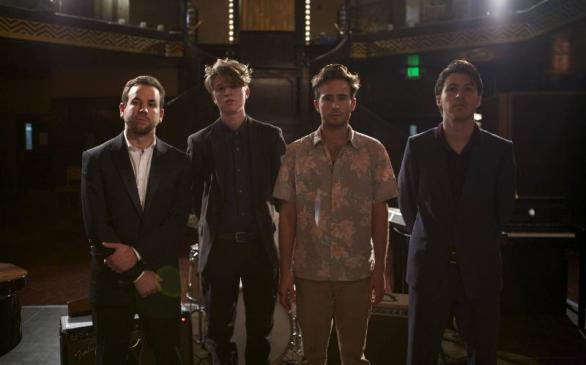 Mötley Crüe Announces Vegas Residency
Everyone from Elvis Presley to Elton John to Garth Brooks has done it, but Mötley Crüe? The rowdy rockers are the latest in a long line of entertainers to take to the stage in glitzy Las Vegas for an extended run of performances. The world’s most notorious band is heading to the world’s most notorious city to play a dozen shows at the Joint at the Hard Rock Hotel & Casino starting Feb. 3 and running through the 19th.
Drummer Tommy Lee, never at a loss for words, says, “I don’t know about you but when I think of Mötley Crüe I think of filthy sex, drugs, a really big show and way too much fun. Sounds like Vegas doesn’t it? A match made in heaven!”
Ticket info is at motley.com.

Clarke + Gore = VCMG
Depeche Mode principals Vince Clarke and Martin L. Gore are working together for the first time since 1991 and calling their techno-inspired outfit VCMG.
Clarke explains, “I’ve been getting into and listening to a lot of minimal dance music, and I got really intrigued by all the sounds. I realized I needed a collaborator so it occurred to me to talk to Martin.”
Gore says, “Out of the blue I got an e-mail from Vince just saying ‘I’m interested in making a techno album. Are you interested?’ So I said OK!”
The pair has finished an as-yet untitled album, produced by Uberzone/Q and ready for release at a to-be-determined date in 2012. In the meantime a VCMG EP called Spock is now available digitally.

Nothnegal: Win a Trip to the Maldive Islands
Maldivian melodic death metal band Nothnegal is celebrating the release of their first full-length album by giving fans a chance to win a trip to their homeland, the Maldive Islands. Decadence drops on Jan. 24, but if you pre-order a copy from season-of-mist.com you’ll be automatically entered in the contest to win a five day journey to the all-inclusive Fihalhohi Island Resort in the summer of 2012. The trip for two includes round-trip airfare, scuba diving and water sport activities at the resort and a meet-n-greet with the band.

Half Notes
Don’t Think, a film by Adam Smith starring the Chemical Brothers, will be screened at select theaters in 20 cities worldwide on Jan. 26. Smith, the group’s longtime visuals collaborator, shot the full-length concert film in Japan last July. The ArcLight Theater in Hollywood is the local participant; for other cities visit dontthinkmovie.com.

The official biography of Finnish prog rock band Nightwish is now available in English for all Kindle apps. Once Upon a Nightwish (Bazillion Points Books) details the departure of singer Tarja Turunen in 2005 and all the band’s doings from 1996-2006.

Remember the whole Justin Beiber paternity issue with Mariah Yeater? Sacramento band Get Shot! wants to help out Yeater a little financially and is setting aside 10 percent of the proceeds from sales of their new Keepin’ it Sleazy album for the young mother. The band reportedly will be sending Yeater a $1,500 Wal-Mart gift certificate for Christmas.

As part of their 15th anniversary celebration, Polyvinyl has released a DVD compilation called A Brief History in Moving Pictures featuring acts like Deerhoof, of Montreal, Owen, Mates of State and many others.