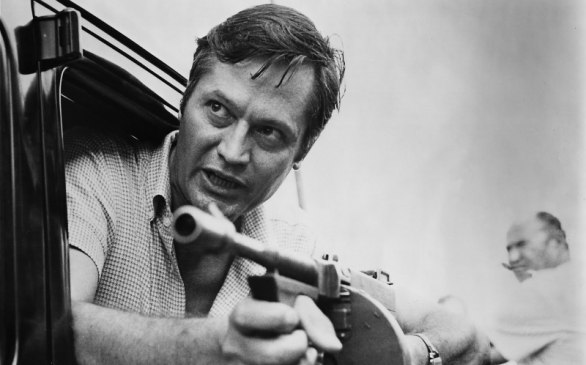 The unheralded godfather of the fast-and-cheap indie film, Roger Corman, has spent his career not getting the respect he deserves, and Corman’s World: Exploits of a Hollywood Rebel seeks to show that the movie industry would not be what it is today if it was not for Roger Corman.

Corman’s World is a star-studded tribute to Corman, Hollywood’s most prolific writer-director-producer ever and a seminal influencing force on modern moviemaking over the last 60 years. He launched many legendary careers, including Jack Nicholson, Robert De Niro, William Shatner, Francis Ford Coppola and Peter Bogdanovich, just to name a few. Corman changed the landscape of filmmaking with a career that spawned in the late ’50s.

Corman provided a refreshing alternative to stuffy and overly expensive Hollywood features with original cult films such as the The Fast and The Furious (1955), The Little Shop of Horrors (1960), The Cry Baby Killer, The Intruder, House of Usher and The Wild Angels (which at that point in 1966 was his 100th film). The film industry is heading into what I feel is the Neo Corman era, where the industry is going to look to cheap, fast films to satisfy the masses. It’s funny how Corman has never gotten the credit he deserves, but soon he will get that and more.

Director Alex Stapleton does an incredible job weaving archival footage following Roger’s illustrious career: From his early days of genre-defining classics, Corman continued to produce and distribute films outside the studio system. Along with feature interviews with Hollywood icons and cinematic luminaries, some who launched their careers within Corman’s unforgettable world of filmmaking, including Paul W.S. Anderson, Bogdanovich, De Niro and Jack Nicholson, Corman’s journey truly shows that with hard work and determination you can create true Hollywood magic. Although some of Corman’s films were not always of the quality and class of other Hollywood classics – which was readily admitted to by Corman and luminaries like Nicholson, who is awesome in his interviews – they got the job done.

Corman is a symbol of cinematic inspiration and shows that anyone can pursue filmmaking. While you don’t have to be a film student extraordinaire to get your dreams on screen, it takes persistence, grind and hustle. The mind-boggling aspect of Corman’s documentary is that he is nearly 86 and still churning out flicks left and right – around 500 to date. Corman continues adding to his legendary cult film empire, one low-budget success at a time, capitalizing on undiscovered talent and pushing the boundaries of independent filmmaking.

This documentary is a must-see for anyone interested in the film industry.