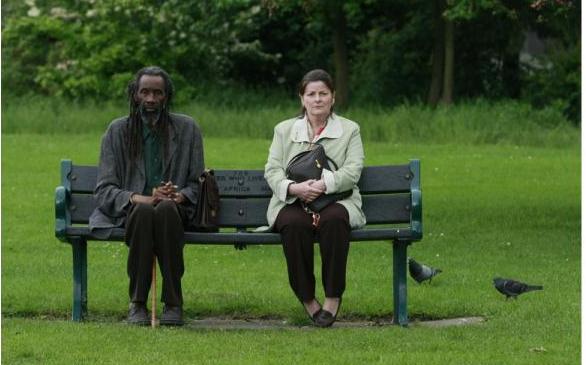 Sotigui Kouyaté as Ousmane and Brenda Blethyn as Elisabeth in London River
(Credit: 3B Productions)

Finally coming to America is the critically lauded film London River, which debuted at the Berlin film festival and received much acclaim. It is the riveting story of two parents looking for their respective children following the aftermath of the London bus bombings in 2005.

London River, directed by Rachid Bouchareb, the three-time Academy-Award nominated director of Days of Glory and Outside the Law, stars Brenda Blethyn (Atonement, Pride & Prejudice) as the closed-minded suburban farmer Elisabeth Sommers, and the late Sotigui Kouyaté (Little Senegal, Genesis) who helps drive this controversial film with his portrayal of the quiet and wise Ousmane.

Ousmane believes that his son’s being a Muslim and not seeing his father since childhood pushed him into a life of bitterness and terrorism, and upon hearing of the attacks believes that his son may have been one of the bombers. Elisabeth, on the other hand, is a small-town farmer who has let her daughter go from her sheltered rural life to London for school, and fears the worst as her daughter has always maintained steady contact. She tries to reach her, especially after news of the bombings, but has not heard from her.

Elisabeth does what most parents would do in the same situation: She gets on a train and desperately heads to London trying to solve the mystery of her daughter’s disappearance. The search spins an unusual web of fate and secrets. Elisabeth now sees that her daughter isn’t who she thought she was, and Ousmane at the same time is coming to that same realization about his son. The two parents soon see that their lives are eerily connected.

The connection at first startles the small-minded and xenophobic Elisabeth who believes that all Muslims are bad people and terrorists. But she learns that she must depend on Ousmane, a Muslim, and control her fears to solve what happened to her daughter.

London River is a great story that puts you in the middle of a historical event most people never really talk about anymore. The story gives a heart and face to the tragedy. It is an extremely sentimental movie, unveiling a complication of the values that we as people have put on ourselves, and how we simply have notions about others before we even truly know them.

Bouchareb does an amazing job with the Ousmane character, portraying how we take hold of racial, xenophobic and religiously biased values and how they make us think about others. London River is a great film that makes you think about how we as humans have to start trusting and helping one another, because who knows, maybe the person you thought you could never believe or trust holds the key to a mystery within yourself.