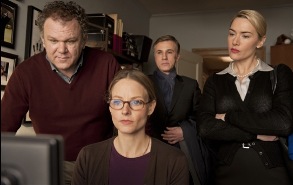 Those unfamiliar with Yasmina Reza’s critically acclaimed play, “God of Carnage,” are in for a refreshing movie-watching experience in Roman Polanski’s big screen adaptation. We’ve seen quite a few great films in recent years that were based on stage plays, like Doubt and Rabbit Hole, but none like this. First of all, you immediately notice that the story is indeed adapted from a play. The movie doesn’t even attempt to pretend otherwise.

Carnage is restricted to Penelope (Jodie Foster) and Michael Longstreet’s (John C. Reilly) small Brooklyn apartment. It’s nice, but as other movies and TV shows seem to always ignore, New Yorkers are cursed with relatively compact living spaces. Except for the playground shots that bookend the movie, we are only let into this contained space where, with the couple’s guests Nancy (Kate Winslet) and Alan Cowan (Christoph Waltz), we see four seemingly civilized adults reduced to savage-like, petty behavior.

The restrictive setting makes way for the palpable tension between the four, executed beautifully by the carefully intense stage-like performances of the well-chosen cast. With no major action in the plotline – except for one scene where Winslet’s character actually vomits from the stressful circumstances – dialogue and acting become the central focus of Carnage.

What initiates the ruckus in the first place? The Cowan’s 11-year-old son Zachary, “armed with a stick,” attacks the Longstreet’s son Ethan at the playground, knocking out two of his teeth. Penelope, a writer and part-time bookstore clerk, and Michael, home decor and toilet flushing-system salesman, welcome Nancy and Alan, outfitted in stereotypical New York power couple suits, into their quaint – albeit decorated with fancy tulips and rare art books – home.

With the attempt to suppress any tension that might occur between two pairs of supposedly concerned parents, polite conversation devolves into hostility about class, marriage and values as citizens of the world. Peppered with plenty of comedic relief, from the sporadic ringing of Alan’s Blackberry to Michael’s mother’s phone calls, Carnage delivers many laugh-out-loud moments, just like watching the real thing on stage.

Polanski’s adaptation is exquisitely executed. What the movie lacks in action that we expect in big-screen features, it more than makes up for by four very strong performances, especially on Waltz’s and Winslet’s parts. The screenplay, likewise, is beautifully done. Every word packs a punch, and for a story that is an intriguing commentary on serious real-world issues, we laugh as we play along.

Carnage opens in New York and the following L.A. theaters on December 16: