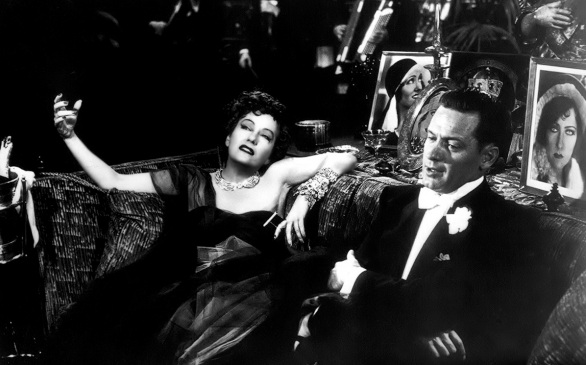 A Scene from Sunset Boulevard

WARNING: The following anecdote contains tales of debauchery, excessive imbibing and the devil’s music, and should not be considered an endorsement. In fact, you probably should stop reading right now.

Yeah, I figured you’d still be reading. This is a story of my favorite New Year’s Eve of all time. I was 17 at the time, and like most of my high school friends, I was doomed to live through another desperate attempt to make something memorable out of amateur night. Like all New Year’s Eves, it was destined to end in disappointment, disillusion and disgust. And that’s on a good New Year’s Eve.

My best buddy Jack and I were resigned to sharing another horrible New Year’s Eve when our pathetic teenage lives took an unexpected turn for the better. Tommy, the gifted sandwich man at the restaurant we worked at on weekends, was having another of his legendary New Year’s Eve parties, and he stunned us by inviting us to “drop by if you’re in the neighborhood.”

We couldn’t believe it. Tommy’s parties could have had their own slogan, like “What happens at Tommy’s parties becomes depositions in future litigation.” We had heard rumors of what happened at those parties, but most of those in attendance suffered from serious memory impairment, which only enhanced the legend.

Tommy was an adult, and his party guests were other adults, which included women, so you can imagine how excited we were to go to the party and cavort with adult women. We hoped we would have stories to tell for years to come, and one day perhaps I would write a column about it.

The party did not disappoint. It was a Hollywood movie party – the kind of party you see in movies like Breakfast at Tiffany’s, but never actually experience in real life. The bathtub was filled with booze, the music was deafening and the women were as flirtatious as they were old (some of them were at least 24). The party didn’t end until dawn.

I was reminded of Tommy’s party after seeing Garry Marshall’s new movie New Year’s Eve. Believe me, Marshall’s movie is nowhere near as much fun as Tommy’s party, but it brought back some fond memories. It also got me thinking about how New Year’s Eve has been depicted in movies. I can’t think of many in which the holiday dominates the film, as Marshall’s does, but the ones I’ve liked the most have had a pivotal New Year’s Eve scene that advances the action.

In the spirit of a holiday that inspires endless lists of year-end lists, here is a list of my favorite New Year’s Eve movies.

1) The Godfather, Part II – My second favorite movie of all time (right behind The Godfather) has a crucial New Year’s Eve scene in Cuba as Castro’s revolution kicks into high gear. It’s also the party at which Michael gives his brother the kiss of death. “I know it was you, Fredo. You broke my heart.”

2) Sunset Boulevard – One of the greatest movies ever made, and one of the creepiest New Year’s Eve party scenes ever depicted. William Holden gets dressed up, expecting a big party crowd, only to discover that Gloria Swanson is ready for her close-up.

3) The Poseidon Adventure – I’ve had some bad New Year’s Eve experiences, but they have rarely ended with a ship being turned upside down by a huge wave.

4) Ocean’s Eleven – The original 1960 heist film takes place on the big night. The remake changed it to a fight night.

5) Trading Places – The big scheme to get back at Randolph and Mortimer Duke really gets going during a New Year’s Eve celebration on a train.

6) Boogie Nights – New Year’s Eve was not the biggest part of this movie, but it played a minor role.

7) After the Thin Man – The second installment in the film series about the coolest couple to ever grace the silver screen – Nick and Nora Charles – gets started at a New Year’s Eve party.

8) Sleepless in Seattle – This is the start of the romantic comedy portion of our program, which was inevitable since a lot of romance goes on when people get together for New Year’s Eve.

11) While You Were Sleeping – Can you think of a better New Year’s Eve date than Sandra Bullock?

12) End of Days – Some people think this was a prediction of what might happen if Arnold Schwarzenegger ever became governor of California.

13) 200 Cigarettes – Lots of people named Affleck were in this movie.

15) Strange Days – Awesome pedigree (directed by Kathryn Bigelow, co-written by James Cameron, starring Ralph Fiennes) but some thought it was a dog.