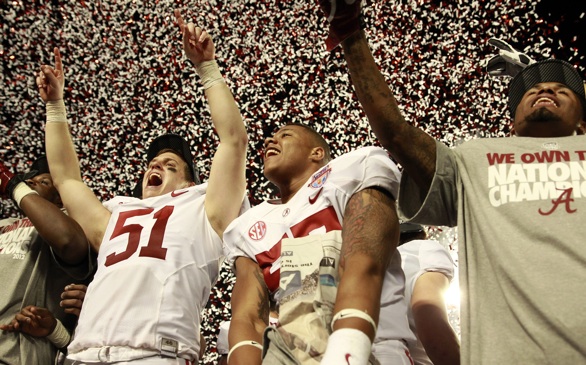 Wisconsin fans again this season have been treated to an offense capable of moving the football into the end zone against just about any defense in the country. Wisconsin (11-2) enters the Rose Bowl ranked No. 4 nationally in scoring at 44.6 points per game, 10th in rushing at 237.4 yards per game, 15th in total yards at 466.9 per game and second in red-zone offense with a 96 percent conversion rate (67 of 70) and a national-best 61 touchdowns. Wisconsin’s opponent Jan. 2 in the Rose Bowl, Pacific 12 Conference champion Oregon (11-2), features a no-huddle, spread offense that is more explosive than the Badgers’.

“I’ve watched them quite a bit; a tremendous challenge,” UW coach Bret Bielema said during a Rose Bowl teleconference. “It is obviously fast-paced. The great thing about this bowl game is that it is kind of like the direct opposites of offensive philosophy. Obviously [coach] Chip [Kelly] and Oregon like to score at a very rapid rate. We like to hold the ball and score as often as possible in the most amount of time.”

“It’s a very unique situation,” Bielema said, “something that we’re excited to play in.”

Junior tailback LaMichael James (149.6 rushing yards per game, 1,646 rushing yards) and junior quarterback Darron Thomas (2,493 passing yards, 30 TD passes and six INTs) are the stalwarts of a frenetic, no-huddle attack. The Ducks are third nationally in scoring at 46.2 points per game, fifth in rushing at 295.7 yards per game, sixth in total offense at 515.2 yards per game and tied for 36th in red-zone offense with an 86 percent conversion rate (54 of 63) with 48 touchdowns.

James rushed for 219 yards and three touchdowns in a 49-31 victory over UCLA in the Pac 12 title game Dec. 2. He became the first player in league history to rush for at least 1,500 yards in three seasons. He has 52 rushing touchdowns in three seasons with the Ducks, which is tied with USC’s LenDale White (2003-’05) for the No. 2 mark in league history.

Thomas completed 20 of 36 passes for 219 yards and three touchdowns against the Bruins. He has a program-record 63 touchdown passes in three seasons.

“You’ve got some of the premier players in the world of college football,” Bielema said. “It should be a great build-up for a great game.”

“I’ve been a huge fan of Russell [since] he was at N.C. State,” Kelly said. “And then watching what he did in his only year at Wisconsin ... I think you’re playing against arguably the best quarterback-running back combination in college football right now. It is fun to watch them on tape. Hopefully it won’t be as fun when we seem them in person. But I know it is going to be a battle to shut those guys down.”

Because the Ducks won the Pac 12 title Dec. 3, the coaches were able to watch UW rally to beat Michigan State, 42-39, on Dec. 4. “I don’t get to watch a lot of college football because we’re playing,” he said. “But I watched the whole game. That was one for the ages. It was a great college football game to watch, just to see how hard the kids from Wisconsin competed, making plays all over the field. I think it is going to be a great game.”

Despite the contrasting style of offense, Bielema and Kelly have something in common. Both are looking for their first BCS bowl victory. Kelly, in his third season as head coach, is 0-2.

“The last two years are old news now,” defensive end Dion Jordan said after the Pac-12 title game. “This team has a different mind-set than the last two years. We show up to play every week.”

The Ducks lost to Ohio State in the 2010 Rose Bowl and lost to Auburn in the BCS title game last season.

“For the Rose Bowl in this conference, it’s the pinnacle,” Kelly said. “To play in the granddaddy of them all if you don’t have a chance to play – obviously because of our two losses – in the national championship, there’s no other game you’d rather play in than the Rose Bowl.”

Both coaches pooh-poohed calling the matchup the redemption bowl.

“I don’t feel that way,” Kelly said. “Every year each team is different. There are a lot of kids who played on our ’09 team against Ohio State who aren’t here anymore. We lost 23 or 24 seniors from last year’s team that played in the national championship. So, I think every year is different. We don’t look at what transpired in the past to be motivation of the future. We know we’re playing against an outstanding team, and we’re going to see what we can do against Wisconsin.”

Bielema, in his sixth season as head coach, is 0-1. UW lost to Texas Christian in the Rose Bowl last season.

“The 2011 season is its own journey,” Bielema said, pointing to regular-season losses against Michigan State and Ohio State. “For us to lose the two games that we did and to battle back the last four weeks of the season and [in the Big Ten title game] to win the way that we did against Michigan State is a journey in itself. For us to be rewarded with the opportunity to play Oregon and everything they stand for is truly special.”