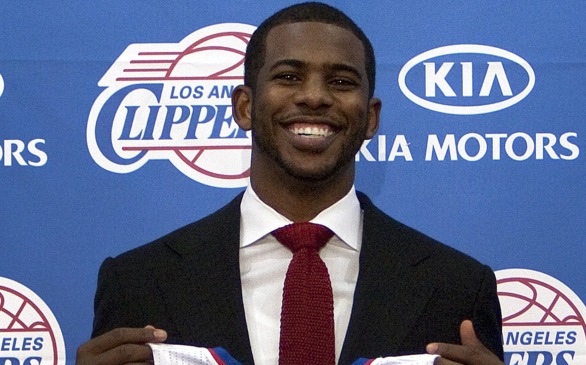 Chris Paul after being introduced to the media.
(Credit: Gina Ferazzi/Los Angeles Times/MCT)

Yes, Paul is now a Clipper, and he is the player (along with fabulously talented Blake Griffin) that the franchise has been waiting for. Place them together along with Chauncey Billups, Caron Butler and DeAndre Jordan, and you have a solid starting lineup. For now, the Clippers seem to have a better starting lineup on paper, but they still need to find their chemistry on the court. However, we cannot discount the Lakers at any point – even though they are aging, looking for a trade, have traded Lamar Odom and have the distraction of Kobe Bryant’s pending divorce.

What a soap opera already, and the 2011-2012 campaign has not even started, right? Yes, both teams will be in for a treat this season, especially the Clippers who are expected to be playoff bound.

To get Paul from the New Orleans Hornets, the Clippers gave up a lot by sending away the young, talented shooting guard Eric Gordon, forward Al-Farouq Aminu, solid center Chris Kaman and a first-round draft choice (which could be a lottery pick). However, Paul is arguably the best point guard in basketball right now, and he can easily deliver 20 points and 10 assists on a consistent basis. He is a proven leader, and his best asset is that he makes other players better on the court. He is a contender and a champion without a ring.

The Lakers made an attempt to acquire Paul earlier, but that did not work out too well for the purple and gold after NBA Commissioner David Stern nullified the transaction for “basketball reasons.” Bryant and the Lakers’ front office have been furious with what occurred, and they certainly have made their voices heard in their own respective manners.

“I knew we were doing the best thing for New Orleans, and that was my job,” Stern said at the time. “You have to stick with what you think was right.”

Bryant had his own views when it happened.

“It’s part of the business,” he said to Yahoo!Sports. “The Lakers tried to make a move to get a player here who could carry them on to the next 10 years after I retire. But the other owners weren’t with it. Simple as that.”

Rumor has it that Dan Gilbert (owner of the Cleveland Cavaliers) and Mark Cuban (owner of the current champion Dallas Mavericks) immediately sent e-mails to Stern in order to prevent the trade from happening. At the time, Paul was considering a lawsuit against the league.

In order to acquire Paul, the Lakers were giving up Pau Gasol and Lamar Odom. Gasol took it like a professional, but Odom did not and he landed with the Mavericks after he requested his own trade. The inexplicable thing, however, is the Lakers did not receive anything in return for Odom; since then, they have classified it as a salary dump to save money and get a trade exception.

Regardless, of what each team has on paper, the Lakers still remain the better team in Los Angeles. Will there be a power shift? Well, we’ll see!