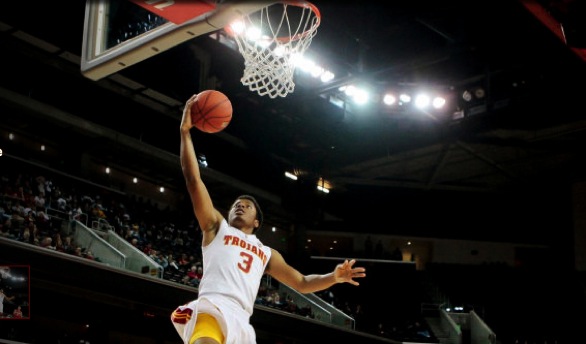 USC
The Trojans suffered a 63-59 loss to the Georgia Bulldogs at the Galen Center with 3,784 in attendance. The loss moved the Trojans to 4-7 on the year, while Georgia improved to 5-5 overall. At halftime, the contest remained tied at 25, but the Bulldogs held a slight edge in the second half against USC. Georgia shot 51 percent from the field, converting on 22 of 43 shots, while USC collected 20 of 55 for 36 percent.

USC out rebounded Georgia 35-23, but their main concern during the game was their inability to make shots. A 36 percent from the court just will not do it. For both teams, three different players scored in double figures. Guard Alexis Moore led USC with 18 points, while guard Maurice Jones scored 11 and forward Aaron Fuller had 10. Georgia saw freshman Ken Caldwell-Pope score a game high of 21 points to go along with five rebounds and two steals. Gerald Robinson had 17 points and Dustin Ware contributed a solid 12.

The Trojans host the No. 12 ranked University of Kansas Jayhawks at the Galen Center on Dec. 22.

UCLA
The visiting UC Davis Aggies could not stop the host UCLA Bruins at the Honda Center in Anaheim, as UCLA propelled themselves to an 82-39 victory with over 5,000 fans in attendance. With the victory, the Bruins pushed their overall record to 5-5 for the year. Meanwhile, UC Davis continued to struggle, dropping to 1-9.

“We played extremely hard defensively, especially in the first 20 minutes," UCLA head coach Ben Howland says. “We held them to 19 percent shooting in the first half, and the zone was good again today.”

Sophomore center Joshua Smith led the Bruins with a double-double of 18 points and 10 rebounds, his first of the season. Smith also had three assists and three blocked shots in his 21 minutes of playing time, while making seven of 10 attempted shots. Additionally, he was four of seven from the free throw line.

“I tried to be aggressive today, especially when I saw the double teams coming slowly,” Smith comments. “I felt great out there, much different from the first game of the season. I played 21 minutes, but felt like I could have gone for 10 more.”

Two other Bruin players scored in double figures, with forward David Wear chipping in 15 points and six rebounds while guard Lazeric Jones contributed 12 points and seven assists. Guard Tyler Lamb was UCLA’s player with most minutes; he scored nine points, rebounded nine balls and dished out seven dimes in 31 minutes. Another Bruin with significant production was Norman Powell, who posted eight points and 10 rebounds off the bench within 21 minutes. Brendan Lane, also a substitute, produced five points and five rebounds in 13 minutes.

As a team, the Bruins shot 53 percent from the floor (making 32 of 61 shots). One of the other main differences in the match was with the rebounding scenario, where the Bruins outrebounded the Aggies 50-34. UC Davis did, however, commit more turnovers than UCLA at 15-10.

“We also did a better job on the boards with 50 total rebounds, especially Powell, who got 10,” Howland adds. “Tyler Lamb had a great game for us also and added strong defense. Anthony Stover’s five blocks really energized us, and we'll find a way to get him more minutes.”

This game was really no contest for the hosts, who led 43-15 by halftime. The Bruins only let the Aggies make 13 shots, holding them to less than 24 percent shooting. Forward Josh Ritchart was the team’s leading scorer for the game, gaining eight points to go along with six rebounds.

The Bruins host the University of Richmond Spiders on Dec. 23.