Rooney Mara: Little-Known Actress Rooney Mara Is About To Get Famous 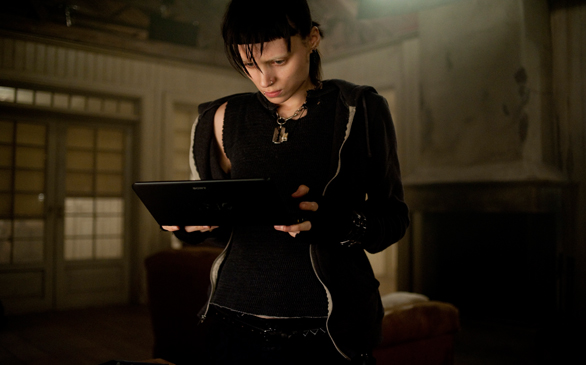 Rooney Mara stars in Columbia Pictures' The Girl with the Dragon Tattoo.
(Credit: Merrick Morton/Courtesy Columbia Pictures/MCT)
“Rooney who?” is not a question people will be asking much longer.

On Tuesday at 7 p.m., David Fincher’s adaptation of The Girl With the Dragon Tattoo - the first installment in the U.S. version of Stieg Larsson’s mega-selling “Millennium Trilogy” - opens in theaters. And there Rooney Mara will be, pale, pierced, and punked-out, hacking into encrypted databases, sleeping with Daniel Craig (and with a woman she picks up at a bar), taking vengeance on a sicko state-appointed guardian ... if you’ve read the book (and who hasn’t?), you know what’s in store.

And Mara, who had a couple of scenes in Fincher’s Oscar-nominated “The Social Network,” and who starred in the 2010 remake of Nightmare on Elm Street but who was pretty much unknown to the world, is Lisbeth Salander, the small, fierce, androgynous Swede with the photographic memory and the childhood trauma kicking around in her head. Mara won the role over the likes of Scarlett Johansson, Natalie Portman and a bevy of other big-name stars.

On Thursday, the Hollywood Foreign Press Association announced its nominees for the Golden Globes. Best actress in a drama: Glenn Close (for Albert Nobbs), Viola Davis (The Help), Meryl Streep (The Iron Lady), Tilda Swinton (We Need to Talk About Kevin), and ... Rooney Mara.

A few weeks ago, Mara was on the phone, describing how she set about preparing for the role. Her first audition was in May 2010, her first screen test in June, but it wasn’t until mid-August that Fincher called her to say she had the job. A week later, she was living in an apartment in Stockholm, well ahead of the production’s start date - soaking up the city, the culture, the coffee, the umlauts.

“Certainly, the three books alone - you know, there’s enough information to satisfy just about anyone, I’m sure,” she says.

“I went to a center for women who have been sexually abused. I went to a school called the Help Group that teaches kids with autism or Asperger’s.”

But spending time in Sweden before shooting began, she says, was key.

“Some people are like, ‘Why would you shoot it in Stockholm? Why would you do it with Swedish accents? Why not just do it in America, if you’re doing an American version?’

“I never really understood those questions, or that logic. You can’t tell this story without Sweden. ... And I don’t think you can really understand the character until you can understand Sweden a little bit.”

As in the book, and in the indigenous adaptation with Noomi Rapace as Lisbeth (“she’s fantastic,” says Mara, who saw the Swedish-language version as a regular citizen, before trying out for the re-do), Fincher’s Girl with the Dragon Tattoo pivots around two brutal rape scenes.

These are not easy to watch, and they were certainly not easy to do. It took a week for Mara and Yorick van Wageningen, who plays her legal guardian, to shoot the scenes.

“They were difficult, certainly,” she says. “It was something that I was really geared up for, though. It was something we talked about constantly. It drives the trilogy, so it was important.

“So I felt very well prepared - as prepared as you can be. ... We went in a week before and blocked it out and rehearsed - as much as you can rehearse a scene like that. ...

“But it was really hard. It was really exhausting. ... It was definitely draining, but you’re sort of running on adrenaline and you just get through it.”

Mara laughs. There were other challenges on the film, too.

“Everything was challenging. Even the scene where I’m just sitting there, going through all the names of the women with Daniel - that was tough because there are so many Swedish words in there, Swedish names, and so much dialogue.”

There’s also a tough, taut chase through a Stockholm subway station - when a thug runs off with Lisbeth’s bag and she goes tearing after him.

“I think it took us three days to do that. ... You don’t really think about it, but even when he grabs the bag from me, you do that over three days and it starts to hurt. That scene was physically exhausting, especially after smoking for a year.”