In The Land of Blood and Honey: Angelina Jolie directs a masterpiece. 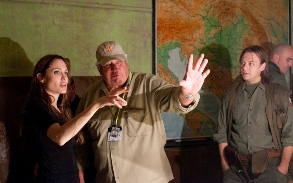 Director Angelina Jolie consults with DP Dean Semler while filming In the Land of Blood and Honey.
(Credit: Dean Semler)

Clint Eastwood, Robert Redford and Ben Affleck are three of the many who have done it successfully. Now, we can add Angelina Jolie to the mix of actors who have turned directors on the big screen. With In The Land of Blood and Honey, Jolie delivers a masterpiece. Written and directed by Jolie, the film was shot in the fall of 2010 in Budapest and Esztergom with several local actors from the region, who lived through the violently dramatic times of the Bosnian War.

“People forget the violence that happened in our time, in our generation, to our generation,” Jolie states regarding the Bosnian War, which occurred from April of 1992 until December of 1995. It seems as if the Bosnian War has been forgotten by most of the world due to the lack of attention it has received since it began and ended. During the war, about 100,000 people were killed, and Bosnian Serbs – backed by Serbian and the Yugoslav army – kicked many out of their homes. They occupied towns and cities in Eastern Bosnia-Herzegovina and took control of Sarajevo, which was the capital.

“I wanted to make a film that would express, in an artistic way, my frustrations with the international community’s failure to intervene in conflicts in a timely and effective manner,” Jolie declares. “I also wanted to explore and understand the Bosnian War, as well as broader issues such as women in conflict, sexual violence, accountability for war crimes and crimes against humanity, and the challenge of reconciliation.”

This is Jolie’s first feature film she has written and directed (She directed a documentary, A Place in Time, in 2007.). “I have never wanted to be a director,” Jolie says. “I have always been asked to, but have adamantly said no.”

Accomplished producer Graham King (The Departed, Hugo, The Rum Diary, The Tourist) was initially just happy to take a look at the script as a favor to Jolie. But he eventually ended up being a producer for the film.

“When Angie sent me the script [I thought], how can we not tell the story?” King shares. “She was actually on the fast track on making this movie with or without me.”

Jolie wanted to cast the correct actors for the film, and she accomplished just that with Goran Kostic playing Danijel, Vanessa Glodjo as Lejla, Rade Serbedzija portraying Nebojsa and the beautiful Zana Marjanovic as Ajla.

“I was struck, and it took me a while to get over all these emotions after reading the script,” says Marjanovic, who currently resides in Sarajevo.

In the film, Ajla is in the mist of preparing for a blind date with Danijel. Soon, they meet at a local restaurant, have dinner and dance. With laughs, smiles and romance in the air while dancing the night away, a catastrophic event soon arrives as a bomb ignites an explosion at the scene.

“This conflict in particular shows how neighbors can turn against each other,” Jolie says. “How does that happen?” Fires, tears, screams and disaster lead to both Ajla and Danijel finding their own route of seclusion, fear and, most of all, shock. No one can believe that a war has begun. Day by day, it seems as if people believe it will soon be over, but that is really not the case. Killings begin and continue throughout the war.

“It was surprising to hear some many people say it [the film] was going to be anti-this, anti-that,” Kostic says.

“Angelina decided not to go shoot in Sarajevo because it was not fully safe,” Serbedzija says regarding the controversies it could have caused, not to mention possible fears to those involved with the production.

In the Land of Blood and Honey depicts dramatic events, but in a surreal way that leaves you on your toes, wanting and asking for more scenes. Moreover, the film contains a story of love (between Ajla and Danijel), a dying relationship (Danijel and his father, Nebojsa) and the continuing troubles of the war when no other nation acts to help or simply end it. I have watched almost all of the movies released this year, and I must admit, In the Land of Blood and Honey is the best yet.

In the Land of Blood and Honey releases in Select Theaters Dec. 23.

For more information, visit in thelandofbloodandhoney.com.