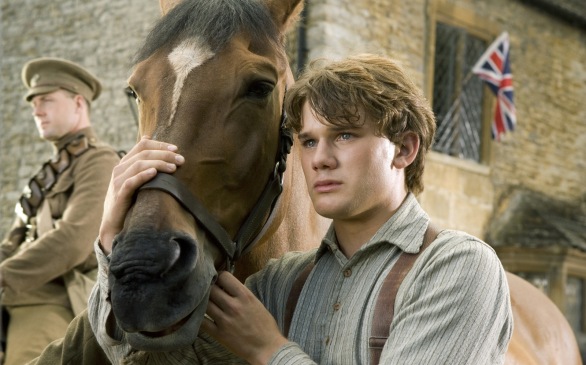 Steven Spielberg returns to the director’s chair with two holiday blockbuster projects: first up is The Adventures of Tintin, followed by the epic War Horse. In War Horse, Spielberg is at his usual heart-pumping and tear-jerking best. This is one movie that tries its hardest to pull and tug at your emotions.

War Horse is based on the Michael Morpurgo children’s book and play of the same name. The film is about a boy named Albert, played brilliantly by relative newcomer Jeremy Irvine.

Albert’s father buys a horse for his farm that is also a special gift for his son. His father actually knows that the horse will never be needed for farmwork and was purchased specially for his son As the story unfolds, Albert and the horse he has named Joey become inseparable in the desperate times of World War I.

Albert’s father, under economic pressure, sells Joey to the cavalry, and young Albert enlists to serve in WWI after his beloved horse is sold. Albert's hopeful journey to reunite with Joey takes him out of England and across Europe as the war rages on.

War Horse uniquely and brilliantly focuses on Joey the horse more so than Albert or any of the other human characters. The story follows Joey on his journey as he touches and effects the lives of the different people that he comes into contact with during World War I. Oddly, it seems that Joey effects some in the negative.

Spielberg was quoted saying that he wanted War Horse to be a war movie that parents can take their children to and teach them something about love and war. With that said, I can say that he more than succeeded except for a couple of scenes that will strike a strong tearful chord for horse lovers and children alike. War Horse matches and even far exceeds Saving Private Ryan in its brief but poignant war scenes and evokes much more emotion.

Joey is just so loveable that he controls the entire movie. Not since Black Beauty has a horse commanded the screen so successfully. The characters are so drawn to Joey that they can’t help but desperately desire to continue to possess him. Spielberg is a master of being able to tell stories with a lot of heart; Joey the horse takes on that role of the heart of the film.

One of the other strong positives of War Horse is the dazzling cinematography by Janusz Kaminski (The Diving Bell and the Butterfly, Funny People) that takes advantage of the beautiful country landscapes of Ireland and England. War Horse does have storylines that weren’t really needed and make the screenplay drag on, but it all comes together and it is a good family film that shows Spielberg at his best.