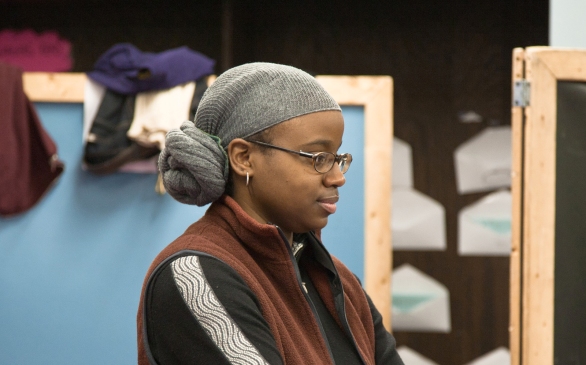 Sure to be a hit, Pariah is controversial yet poignant. The project started as a short film and grew into a feature, says director Dee Rees. She describes how Pariah was written as she was coming out to her parents, and you truly feel the personal aspect of this film. Rees talks about how she was deeply inspired by her own life, being from the narrow-minded and religiously driven south, while growing up in Nashville, Tenn. Homosexuality was not something that you showcased to the world, however, all that changed when she moved to New York and saw that everyone was open and free.

She immediately knew that her story could be told on the big screen. Rees says that that there was a fire burning inside her when she was interning on Spike Lee’s Inside Man. She says that she would take her breaks to work on the script and couldn’t stop until it was on the big screen.

Pariah isn’t the typical Hollywood film; it’s extremely refreshing and original. The film is great because it tells the story of everyday teens going through life as social and sexual outcasts.

When asked how the entire Pariah project came together, Rees notes that her short film was hitting the festival circuit, and that it all changed once she got a call from Rachel Chanoff of the Sundance Institute. Rees was asked if she could make it into a feature, and the rest is history. She took the opportunity and ran with it, getting fully involved with the Sundance Institute. In the workshop process she was able to further define the romantic relationship between the main character Alike and Bina, which is truly a highlight of Pariah.

When asked how she handled the casting of a somewhat semi-autobiographical story, Rees says she couldn’t be happier, as she feels that newcomer Adepero Oduye is exactly right for the coming-of-age role of Alike.

Oduye is truly like a kid on Christmas day, as she talks about her first starring role. She couldn’t help but continue smiling as she dealt with the constant flattery and compliments, and answered queries as to how she was going to deal with her newfound fame. It’s a far cry from working an everyday job, and it is obvious that she knows she is involved in a great project.

The actress handles questions like a pro and says that this whole experience has been great, that she will always cherish the experience no matter what happens. This seems like the theme for the day, as the conversation turns to Aasha Davis, who plays Alike’s love interest Bina.

Davis truly shines in the supporting role and shows that she is ready to the be the next thing, as supported in her work on “Friday Night Lights.” She couldn’t help but gleam with excitement and when asked whether she prefers television or film, she replies, “Wherever I get hired!”

The veteran of the cast, Kim Wayans, provides much of the energy in Pariah as well at the publicity luncheon. When asked how her role in Pariah was different from her normal comedic roles on “In Living Color” and Don’t Be a Menace to South Central While Drinking Your Juice in the Hood, Wayans says that she truly enjoyed taking on such a dark and emotional character and hopes people take something from her confrontational character. Wayans commands the same kind of supporting actress attention that Mo’Nique commanded after her role in Precious.

Wayans says, “I only could hope so.”

As you watch Pariah you can see a lot of parallels between it and Precious, which wowed the world in 2009. Neither is a typical Hollywood film, both are about black life and urban black teens and both have extremely aggressive and painful but true storylines. Rees addresses comparisons to Precious, as she mentions that Precious was very successful, and that she hopes that Pariah will be a film that garners a lot of success and helps implement her career in Hollywood.